Ann Corcoran On This Year's Refugee Quota Vs. Previous Years: "Transparency My A**!"

The chart above is from White House Weighs Lowering Refugee Quota To Below 50,000, By Julie Hirschfeld Davis and Miriam Jordan, NYT, September 12, 2017.

Refugee Resettlement Watch's Ann Corcoran has a big post on this, based partly on a Vice story titled Trump expected to slash refugee levels to lowest in a generation, by Keegan Hamilton and Alex Thompson, September 12, 2017. The headline is wrong, there was a big drop after 9/11, but there's nothing wrong with slashing levels to the "lowest in a generation"—it's more or less what Trump was elected to do. Here's Ann Corcoran:

White House could announce refugee ceiling for FY18 this week 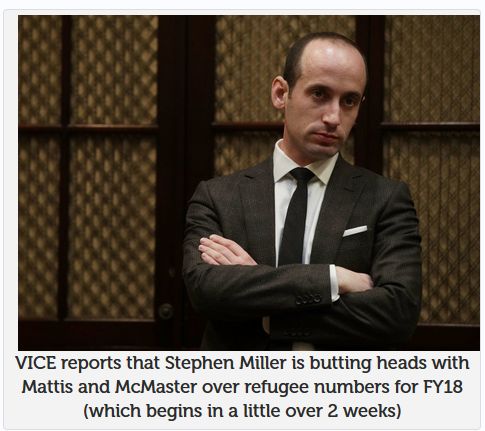 The decision could come this week and the contractors*** are scared to death that the number could be 50,000 or lower. At least that is what VICE News is reporting and they clearly have an inside line to Leftist/Open Borders leakers in the administration if this report is to be believed, and I have no reason not to believe it.

It also confirms the vibes I got listening to the HIAS conference call last week—the contractors are out of the loop!

Before you read the VICE story, be sure to see my post yesterday entitled:

Consider the optics Mr. President! Thousands of impoverished people arriving in the US when Americans are homeless

Now, here is VICE News (emphasis is mine):

The Trump administration is expected to drastically reduce the number of refugees that will be allowed into the United States in the coming year, VICE News has learned.

Multiple sources, including an official in the U.S. Refugee Admissions Program (USRAP) with direct knowledge of the situation, say Trump plans to cap refugee admissions for the 2018 fiscal year at no more than 50,000. That limit would be the fewest in modern history, and less than half as many as President Obama authorized last year.

Trump hasn’t yet made a final decision on refugee admissions, the sources said, but according to the USRAP official, “it won’t exceed 50,000” and could even be fewer. White House officials and members of the National Security Council were scheduled to discuss the refugee cap Tuesday, and an official announcement could come as soon as this week.

A White House spokesman declined to comment on “internal discussions” about refugees. The State Department, which oversees U.S. refugee resettlement programs, told VICE News the cap would be set “after appropriate consultation with Congress” and before the start of the 2018 fiscal year on October 1, but declined to answer additional questions.

According to a source familiar with the discussions, Stephen Miller, Trump’s senior advisor for policy, has been the leading advocate for fewer refugee admissions, and has attempted to sideline other key players in the discussions, including Defense Secretary James Mattis and National Security Advisor H.R. McMaster.

In his proposed budget for 2018, which is under consideration by Congress, Trump calls for slashing the budget for refugee resettlement from $544.7 million to $410 million. Overall spending on U.S. refugee programs, including ones that provide aid to refugees and displaced people overseas during humanitarian crises, would be cut by 13 percent, falling from $3.1 billion to $2.7 billion.

Under the Refugee Act of 1980, which established the current standards for screening refugees and admitting them into the country, the president has broad authority to dictate how many refugees the U.S accepts. In certain years the U.S. has admitted fewer refugees than allotted, but Trump’s proposed cap would be the lowest ever.

This next bit should make your blood boil if you have been (for years) a citizen activist in your community and have been excluded from refugee planning meetings and denied documents about your towns/cities!

Humanitarian groups, which have typically been consulted ahead of a final decision by the president, complain they’ve been completely shut out of the process this year.

Melanie Nezer, senior vice president of public affairs at the refugee resettlement agency HIAS, said in past years there was transparency and an open dialogue between the White House, the State Department, and Congress, but uncertainty is now the status quo. [THERE WAS NEVER TRANSPARENCY FOR TAXPAYERS AND CITIZENS QUESTIONING HOW THEIR MONEY WAS BEING SPENT AND WHO WAS COMING TO THEIR NEIGHBORHOODS!–ED]

“We don’t really know who is driving this train,” Nezer said. “We’re guessing like everyone else. That’s very unusual. In prior administrations, both Democrat and Republican, we’ve been a real partner on this.”

However, have a look at accurate numbers for the ceilings and actual admissions here.  Obama never set a ceiling anywhere near 110,000 until he was walking out the door in 2016.  Also there were many years when admissions dropped below 50,000.

For new readers, the point to remember is that each refugee (client) comes with a pile of money (taxpayer dollars) attached that goes to the contractors, like HIAS, to keep their phony-baloney ‘non-profit’ groups afloat.  See (here) how much they are being paid to do their ‘charitable good works.’

(BTW, HIAS is one of the plaintiffs in the ‘Travel ban’ lawsuit against the President while pocketing millions of federal dollars.)

We have been arguing for weeks that the President should suspend the program altogether for FY18 and tell Congress to investigate the program with an eye to reform it.  Irma and Harvey have made that the most sensible course of action.

We have refugees of our own!

Tell the President what you think by clicking here to get instructions…Tell your members of Congress and US Senators too!

***The federal contractors paid by the head for refugee “clients” they place (secretively!) in your towns and cities:

US Committee for Refugees and Immigrants (USCRI) (secular)

Of course,  while a low, low, low, refugee quota might be good, the best quota would be zero. There's no reason that refugees have to come to the United States of America specifically—one of my earliest articles here was called  Dear Mr. Fox: Please Find Attached our Poor/ Tired/ Dispossessed, Etc.,  in which I suggested that one country that might have some empty space to fit a few refugees in would be Mexico.