2015 was a very successful year for the VDARE Foundation.

On the website, we saw a steady increase in hits with occasional spikes upward when a few of our pieces went viral. We improved our charts and maps, thanks to an intrepid volunteer. We unveiled a massive redesign of VDARE.com and have gradually worked through the growing pains that the redesign brought to light. Our tech team dedicated 2,057 hours to updating, maintaining and un-glitching VDARE.com in the course of the year, and I’m delighted to say that for the first time in VDARE.com history there are zero outstanding glitches left unaddressed. Now when we tinker with the website it is to improve on a good thing, not to add yet another Band-Aid to the structural failure.

Here’s a bit of an overview on our traffic numbers according to Google Analytics, as compared to 2014:

Social media has also taken off. For VDARE.com, you might even say 2015 was “The Year of Twitter.” Thanks completely to our dedicated tweetmeister, our followers have increased by 5,742 and our reach is exponentially higher. Facebook isn’t far off. Social media referrals currently account for about 20% of our website traffic.

VDARE.com Editor Peter Brimelow gave private talks in New York, Cleveland, Baltimore and near Nashville, was featured on 7 radio shows and podcasts, and as editor published 3,632 pieces on VDARE.com including blog entries, articles, podcasts and letters. That brings the cumulative life time total up to 36,005 items on VDARE.com, covering every aspect of patriotic immigration reform and the National Question. 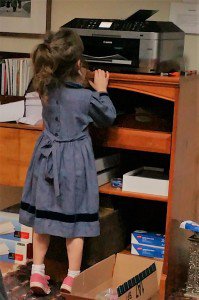 Fundraising is another success story (mostly). We started the year slowly, handicapped by the birth of my third daughter, Victoria Beauregard, and her redheaded temperament that didn’t take well to being flown around the country, or even sleeping much at night (still a problem). Nevertheless, we gained ground starting with the Easter Appeal, and had picked up enough momentum by August that we set a VDARE Foundation record of $30k in one week. In the past it took us 5 weeks to get to that number.

Encouraged, I set the highest goal we’ve ever had for our year-end: $100,000—more than double what we’ve brought in in the past. We surpassed that goal, bringing in a total of $110,875.16. [Right, Karia Brimelow, age 3, volunteering her time as printout-fetcher for the massive year-end mailing.] 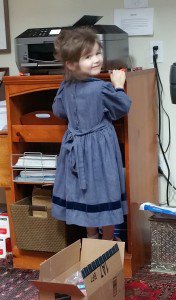 Of course all comparable results I refer to above were garnered before the one-two punch of Ann Coulter’s Adios America and Trump’s presidential election talking points. The political climate has not been this ripe for VDARE.com’s message since we started in 1999. To say that we as an organization, we as a community, we as a nation owe a debt of gratitude to Ann and especially Trump is to put it lightly. But that’s not the whole story.

We in this office believe that neither Ann or Trump would have succeeded without VDARE.com paving the way. Our data and analysis is increasingly (although uncredited of course) drawn on by movers and shakers, by people who influence the future of America. Without the fruits of VDARE.com’s toils to inform and support them, we would have nothing for which to thank them.

It is with unusually affordable optimism that I look ahead to 2016.

We still have reasons to worry. Financially, individual donations, despite recent increases both in dollar amounts and new donors, have not caught up with the massive losses we suffered from the removal of foundation grant support a few years ago. In order to make our yearly budget numbers, I continue to fight against the current.

I think, though, that as far as our message is concerned, it is safe to say there is no putting the cat back in the bag. The public can’t unhear the truth that has been Trumpeted into their ears by way of this Presidential race. So in terms of my fundraising, I may be downstream but at least I’ve acquired a paddle!

Thank you all, dear readers, for getting us this far. Engaging with our content, spreading the message and donating to our cause is what enables us to continue. Keep up the good work!