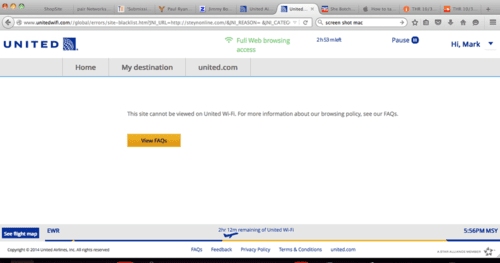 Canadian conservative author Mark Steyn discovered Friday that his website, steynonline.com is on a United Airlines blacklist that blocks accessing the site while passengers use the airline’s in-flight WiFi system. Steyn learned this by being a passenger on United.

Steyn posted to Twitter about his being blacklisted along with a screen grab:

Hey, @united . I'm on your plane right now using your WiFi, which bans my website: https://t.co/GCIbQSKTTn Why? pic.twitter.com/KMd0y2HvnT

A closer look at the URL of the screen grab shows that the word ‘blacklist’ is part of the United WiFi re-direct page Steyn got when trying to access his site along with the message, “This site cannot be viewed on United Wi-Fi…

Steyn talked about it while subbing for Limbaugh today. He's been fighting with them for more than a month, but there has been no response from United. He found that the CAIR website works on United.

Does United Wi-Fi restrict what content I may view?

United does not allow customers to access certain websites that may be inappropriate or unsuitable for inflight viewing.

United probably hasn’t made this decision itself—corporations buy a blacklist from some faceless IT filtering vendor, which I wrote about in 2006 and 2008. (If you're not at 50, 000 feet, you can generally read anything you like on your tablet or smartphone.)

However, what interested me was a really close view of Mark Steyn’s inflight screenshot:

I am happy to see that Steyn is keeping up with our Canadian coverage, and a little startled to see that United, which bans Mark Steyn, allows its readers to access Steve Sailer on TakiMag and VDARE.com.