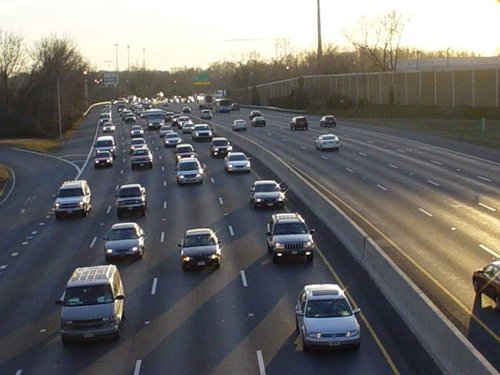 From: Ed Hunter [Email him]

Last week the Washington desk of the French TV station “France 2” contacted us at the Maryland Tea Party and said they wanted to go up on the overpass and conduct an interview on the Donald Trump phenomenon. About 2 PM we arrive at the bridge over I-95 Northbound, and we set up the banners and are waving to people on the interstate below.

The rush hours is beginning and the traffic is starting to slow down as it passed under us. The French TV crew arrives about an hour later around 3 PM. They get out their big expensive TV camera, and the French reporter Valerie begins asking questions. Some of them were hard to answer such as “What does Donald Trump mean?” or “Is this a popular provocation?” (The usual French stuff. How can you answer those types of questions?) Anyway, they get around to the subject of immigration and I can sense I am up against the usual PC wall as they try to get “racist” stuff out of me. So she says “Okay just try to summarize Trump in a way that makes sense to people in France.” So I said “Donald Trump is an American version of Marine Le Pen.” Then she asked if I supported Le Pen and I said, “Absolutely”.

I told her that Muslim immigration will be the end of France and Europe. Then I asked them (off camera) if they felt that way, and they replied “Oh no...it is all a stunt, we do not have a immigration problem in France. These Muslims are French. They came to France to help us rebuild France. I said. ”French built France. Why can’t you rebuild it yourself? “

They looked at me as the typical redneck American. So as we are talking the noise from the honking from the interstate is rising to a crescendo. The honking and cheers for the Trump banners is getting so loud we can’t continue the conversation. The French say goodbye and get into their car and leave. I am asking myself “What is going on? Why is everyone reacting to the banners which read ‘CANT BE BOUGHT...VOTE TRUMP’?” The whole Interstate has erupted. Everyone below as far as I can see is going nuts and cheering and leaning on their horn and screaming out the windows “Donald! Donald!” And we are waving back and this is going on for about an hour. And we can’t figure it all out. So it’s 5:30 PM and getting dark and cold. We take down the banners and drive to Starbucks for coffee when someone calls with the news about the Paris attacks.

The very moment that the French media elites were repeating the PC leftist party line... “We do no have an immigration problem. We are multicultural” etc., the news of the Paris attacks is hitting the car radios of the people on the highway below and they are going nuts in support of Trump and his defiance of the political, media and academic elites.

I called the Valerie the French reporter and she had just heard the news. All she could say is “I am so shocked...so shocked!!” I said ”Why? You had to know this was coming, you were told a million times—”. At which point she hung up. The next morning I read Ann Coulter   in Mediaite: “Donald Trump Was Elected President Tonight.” And I believe he was.

I saw it happen. I watched an almost physical wave of noise and cheering and honking roll up I-95 from as far as I could see south towards DC, to where is disappeared over the horizon to the north, up towards Baltimore, New York and points beyond.