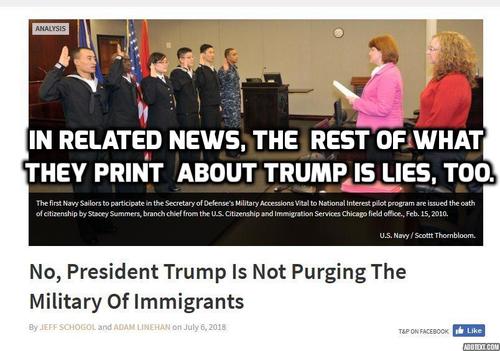 VDARE Radio: The Dishonest Media—Immigrants In The Military Edition

Earlier this week, a number of media outlets ran with the supposedly shocking story that the Trump Administration was refusing to give citizenship to immigrants that had joined the American military.

“Some immigrant U.S. Army reservists and recruits who enlisted in the military with a promised path to citizenship are being abruptly discharged,” the story began [AP NewsBreak: US Army quietly discharging immigrant recruits, AP, July 6, 2018].

The story was written by Martha Mendoza (@mendozamartha) and Garance Burke (@garanceburke), two Twitter checkmarks that pen one piece of Open Borders propaganda after another in their never ending crusade to replace the American people.

Now, of course a lot of people responded strongly to this story. It allows people to conflate “patriotism” and “immigration.” Yet this really has it backwards. The point of the military is to defend the nation. The nation is not defined by the military.

It’s not surprising that for many years now, our rulers, who seem utterly unconnected to the country they ostensibly lead, have been sending our military on missions that have nothing to do with protecting America. Indeed, they often put us in more danger. As Ann Coulter recently put it about the military:

They'd be "protecting our country" if they were at the border. Instead these great men and women are just being used as cannon fodder for no good reason in faraway lands. https://t.co/fhVFlD9UgS

Besides, it’s dangerous to outsource the defense of your country to foreigners. It was this very tactic that was one of the driving factors in the decline of the Western Roman Empire.

So I don’t concede the argument that the American military needs to be staffed by foreigners. But leave that aside. The main thrust of the story isn’t even true.

As the military centered website “Task and Purpose” observed:

The July 5 article centers on the plight of immigrant recruits attempting to enter the military through the Military Accessions Vital to the National Interest (MAVNI) program, which was launched in 2008 to attract more recruits with critical skills such as doctors, nurses, and those who speak strategically valuable languages like Chinese, Dari, Farsi, and Russian by offering them an expedited path to citizenship. Service members who’ve enlisted through the MAVNI program represent only a small percentage of immigrants in the military, the vast majority of whom joined through the same channels as their U.S.-born counterparts.

Titled “US Army quietly discharging immigrant recruits,” the AP story reports that “some immigrant U.S. Army reservists and recruits who enlisted in the military with a promised path to citizenship are being abruptly discharged.” The story implies that institutionalized xenophobia might be behind the a recent spike in the number of MAVNI recruits being “booted” from the program.

But while the AP did report accurately that many recruits have been cut from the program in recent months, the Pentagon insists that the numbers reflect nothing unusual. Indeed, two Army recruiters who spoke to Task & Purpose on the condition of anonymity rejected the notion that the military was deliberately and purposefully ridding itself of non-U.S. citizens —as did a Nigerian immigrant who has been enrolled the MAVNI program for more than two years. “I think the journalist just didn’t understand how MAVNI works,” she opined.

[No, President Trump is not purging the military of immigrants, by Jeff Schogol and Adam Linehan, Task & Purpose, July 6, 2018]

Basically, what happened is that the military was shipping people to basic training who hadn’t completed background checks. Then, later, these immigrants would be separated from the military and not told why. This is government bureaucracy at work, not an immigrant “purge.” The real difficulty is something inherent to the program—if you are recruiting immigrants from areas that tend to be security threats, it is often difficult to run a background check to make sure they will be acceptable members of the armed services.

But reporters don’t care about that. In fact, it doesn’t matter what the truth is. The reporters wanted an angle to bash Trump that would go viral on social media. They got their story. Whatever clarifications and explanations come out later will receive almost no notice. Shout the lie, whisper the retraction—or, if not an outright lie in this case, at least give a story the most sensationalistic spin possible.

That’s what the media does. Every day, it’s a new propaganda offensive against the historic American nation. Every day, those whom President Trump accurately called the “enemy of the people” are working to deconstruct our country. They don’t care about the truth, and they don’t care about “journalism.” After all, the dirty secret of the profession is that journalism isn’t really a profession at all—it’s just a tactic.