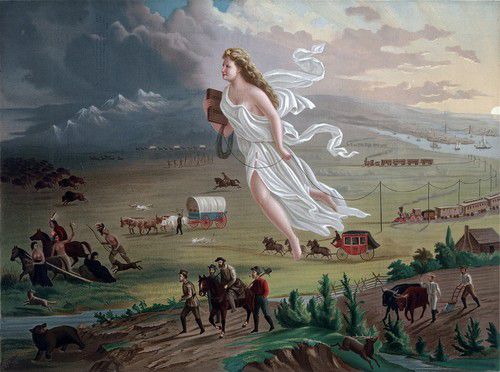 Welcome to VDARE Radio, I’m your host Virginia Dare. And today, we’re going to be talking about Manifest Destiny.

President Donald Trump recently spoke at the graduation ceremony of the Naval Academy. He spoke of the greatness of America and the unlimited potential of our country, as well as the glory of our past achievements [Read President Trump’s U.S. Naval Academy Commencement Address, by Lena Felton, The Atlantic, May 25, 2018].

However, the president upset the usual suspects, the journalists and the professional grievance mongers when he said the following:

[T]here is nothing Americans can’t do. Absolutely nothing. In recent years and even decades, too many people have forgotten that truth. They have forgotten that our ancestors trounced an empire, tamed a continent, and triumphed over the worst evils in history. In every generation, there have been cynics and critics that try to tear down America. But in recent years, the problem grew worse. A growing number used their platforms to denigrate America’s incredible heritage, challenge America’s sovereignty, and weaken America’s pride.

Naturally, cynics and critics responded by trying to tear down America. They were especially incensed by the president’s positive reference to how our ancestors tamed a continent.

"Tamed a continent" is a terrible euphemism for genocide.

Yet which people? And what is so “worrying?”

We didn't tame a continent. We stole it with lethal force and built it with slave labor. And anyone who doesn't think that merits an apology shouldn't be allowed to live here.

This has it precisely backwards. What good is an apology without the specific person making it giving back what he or she considers ill-gotten gains? If anything, only those who do not believe there was anything wrong in America’s conquest of the continent should be allowed to stay this country. Anyone else who continues living on what they believe is “stolen land,” is simply a hypocrite, benefiting from actions they supposedly disagree with but not actually doing anything to atone for them.

To say that Americans having “tamed a continent” is a bad thing is to say that it would be better had America never existed. You can believe that, but then don’t call yourself an American, don’t take advantage of being in this country, and don’t pretend that you have this country’s best interests at heart. Otherwise it is just empty virtue signaling.

One final issue is the question of American Indians. Today, the politically correct term is “Native Americans.” But this is a nonsensical term, as there was no “America” when just the indigenous people were here. America was a creation of European settlement. Calling the various tribes “Native Americans” is something of an insult to them, because it denies their own history.

Still, there’s a lesson in their experience. For some reason, leftists often invoke American Indians to argue that the United States should allow more immigration. This doesn’t make any sense. If anything, their example proves the opposite. Whatever the short-term benefits to some people, whatever the economic or cultural arguments, whatever the good intentions of some people, eventually demography is destiny. American Indians lost control over this continent because of mass immigration. And if Americans don’t control immigration, we are going to do the same.

Some of the people denouncing President Trump may think that’s a good thing. But why should actual Americans, those who care about our country, people, and future, believe them? 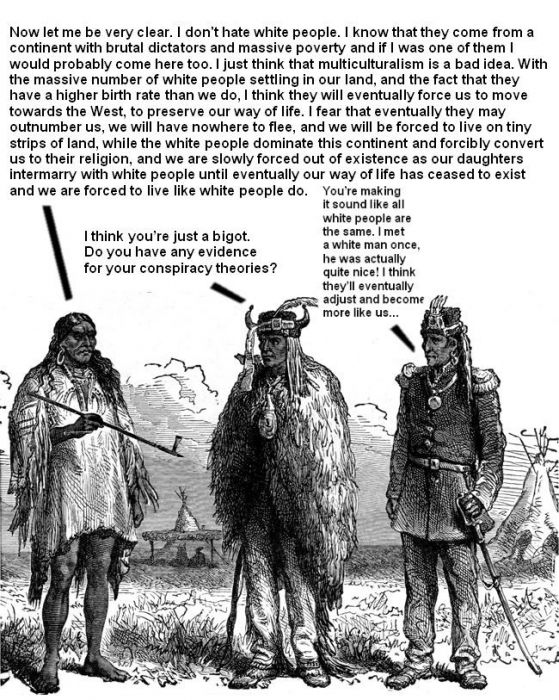