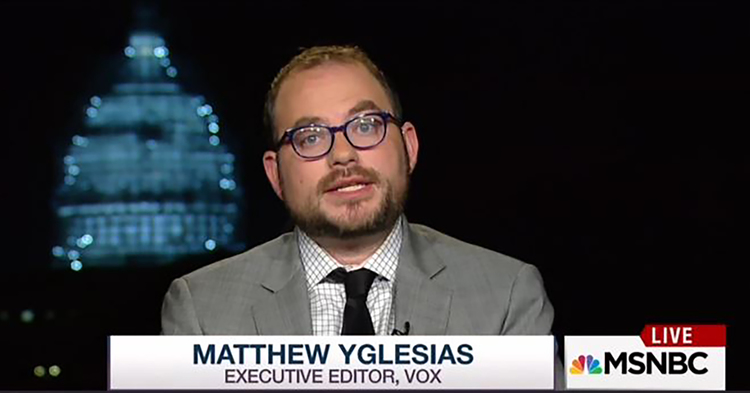 In Vox, Matthew Yglesias continues his campaign to allow everyone to grow up in the same kind of building as he he did:

Both Josh Marshall and David Leonhardt have written recent columns about the idea that wage stagnation poses a particular political problem for Democrats — a problem that Democrats don’t have a clear answer for. … Where everyone seems to agree, however, is that it’s a huge substantive problem — and one where Democrats tend to offer solutions that are rather long-term in nature. … So here’s an idea that should boost wages in both the short- and medium-terms as well as having long run benefits — liberalize land-use rules to allow for denser construction in the country’s most expensive suburbs and cities.

Here’s Washington Square Village, part of the faculty housing owned by New York University. Yeah, it looks like Cabrini Green, but it’s full of NYU professors instead of welfare mothers and their boyfriends. I could imagine living happily there, but I’ve generally been happy wherever I’ve lived. Except for the fall of 1988 when Eddie the drug dealer lived across the street on the same floor so I could look in his window (and he could look in mine) and if he wasn’t home his strung out clients would howl for him for hours. That got on my nerves.

The short-term wage boost would come from the construction itself. In places where prices are very high — places like San Mateo County, Brooklyn and Long Island, the suburbs west of Boston, and all points north and west of the White House in the Washington DC area — it would be extremely profitable to construct new houses if that were allowed. This would mostly mean replacing detached single-family houses on large suburban lots with townhouses or low-rise apartment buildings, but would also entail replacing some rowhouses and low-rise structures with high-rise towers. …

I’m sure the nice people of Chevy Chase, MD and Wellesley, MA will give your suggestion the fullest consideration.

The kind of wages that matter are inflation-adjusted wages — wages that account for increases (or decreases) in the cost of living.

Talking about “inflation” is distracting because the cost of buying a home is specifically excluded from the government’s inflation index. There’s a simple concept called “standard of living,” but it seems to have dropped out of use.

An accelerated pace of new construction would moderate the tendency of living costs to rise rapidly in coastal metropolitan areas. It would also increase the quantity of people able to take advantage of the relatively high nominal wages that exist in these same areas.

In other words, waitresses in Wellesley would see their cost of living rise more slowly — and thus their real wages rise more rapidly — in the world with more construction. At the same time, the greater volume of housing would allow more residents of low-income states like West Virginia and Idaho to relocate to the more prosperous economies of California and Maryland. Economists Enrico Moretti and Chang-Thai Hsieh estimate that the static inefficiencies associated with people’s inability to move to prosperity are costing hundreds of billions of dollars in lost income.

You know, we did have a construction boom in the last decade. It was in all the papers at the time. It didn’t actually do all that much for, say, West Virginians, because it sucked in so many illegal immigrant construction workers. Here’s a 2006 VDARE article in which I explained why somebody from Cleveland was less likely to move to Las Vegas to work construction than somebody from Sinaloa. And here’s my 2010 review of Tory cabinet secretary David Willetts’ book The Pinch in which he explains why the boom in London has done more for workers from Krakow than from Liverpool. Construction booms don’t do much for the citizens unless you have very tight borders.

The average population density of the United States would be unaffected by changes in housing policy.

You know, the Bush Administration and Congress changed housing policy in 2002-2004 and it led to illegal immigration and a baby boom among illegal immigrants. Or actually, Yglesias probably doesn’t really know this, or he kind of sort of knows it but it’s not the kind of thing you are supposed to talk about, so it’s easy to forget. If there is anything the last decade should have taught us, it’s that’s housing policy, diversity policy, and immigration policy are deeply interconnected, but nobody seems to want to notice that.