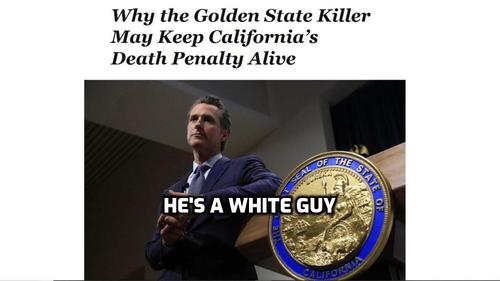 You'll Never Ever Guess Why NYT Is Having Second Thoughts About California Abolishing Death Penalty ...

… Gov. Gavin Newsom, a Democrat, issued a moratorium in March on executions in the state, which has more death row inmates than anywhere else in the Western Hemisphere. But that decision has not stopped local prosecutors from seeking new death sentences, underscoring the divide in the state between conservative prosecutors and liberal reformers like the governor.

And as liberal as California voters are generally, as recently as 2016 they rejected a ballot measure that would have abolished capital punishment, and approved another one to fast-track executions. …

New death sentences in California have declined in recent years; 2018 was a record low, with five new sentences. The drop aligns with a national trend, as public support for capital punishment has waned and juries have been reluctant to impose death sentences in the face of evidence of racial disparities and high-profile exonerations….

Many supporters of capital punishment say that while the system can be reformed to reduce racial disparities, and thus produce fewer death sentences, the penalty should remain an option for prosecutors and juries in the most heinous of crimes, including some of the cases underway in California. …

Research that shows racial disparities in the capital punishment system — that black and Latino men are disproportionately sent to death row — has led to an acknowledgment that the system is flawed, and is at the heart of calls for abolition. But in California, supporters of the death penalty argue that white men are charged with committing some of the most egregious crimes, including Michael Gargiulo, the Hollywood Ripper suspect, or Mr. DeAngelo, who was once a police officer.

“Gargiulo is a white dude,” Ms. Hanisee said. “Golden State Killer, he’s a white guy who was a cop.” She also noted that many of the 24 death row inmates who have exhausted all of their appeals — and would be next in line for executions if they were proceeding — were white men.

“Of the 24 or so who are presently eligible for execution, half of them are white men,” she said. “So let’s execute them.”

I look forward to future debates in the New York Times:

Let’s Execute All the White Murderers

No, Let’s Abolish the Death Penalty So White Murderers Can Be Raped Over and Over For the Rest of Their Lives by Their Giant Black Cellmates