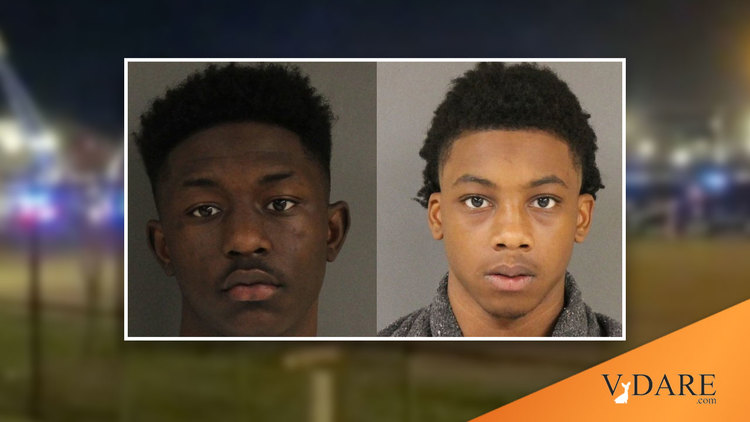 You Can Have Nice Things Or... Mass Shooting By Two Black Males At Mudbug Festival In Nearly 90% Black Jackson, MS Forces Cancellation Of The Event

Earlier: In 83% Black Jackson, MS, Black Pastor Puts Up Signs Reading: “if Black Lives Matter Then Why Are We Still Killing Each Other?”

You can have nice things, or you can see public events in your city cancelled because black people can’t help engaging in mass shootings. Worse, it was an event celebrating crawfish, perhaps the best delicacy of the South.

Yes, the final day of the Mudbug Festival in nearly 90 percent black Jackson, Mississippi was cancelled because of a black mass shooting.

Both are being charged as adults.

According to court records, on or about September 14, 2020, Berry robbed two women in the 600 block of W. Porter Street. Berry allegedly took their cell phones and drove away in one of the victim’s vehicles. Also on September 15, he allegedly tried to rob a third victim in the 800 block of North Jefferson Street.

He was indicted on those charges by a Hinds County grand jury in December 2020.

Berry was indicted on additional charges the following August, also for crimes that allegedly occurred in September 2020.

According to an August 2021 indictment, on or about September 10, 2020, Berry and another individual stole a vehicle, keys, and cell phone from a person at gunpoint in the 2000 block of Willow Way Drive.

Berry was initially denied bond in Jackson Municipal Court on the armed robbery charges. The amount was later reduced to $400,000, or $100,000 per charge, in Hinds County Court, records indicate.

In October 2020, County Court Judge Johnnie McDaniels granted a motion by Berry’s attorneys that he undergo a mental evaluation at the Mississippi State Hospital at Whitfield.

“The court, in accordance with all applicable laws and rules, does hereby find that there is reasonable ground to believe that the defendant is mentally ill and does therefore order that (he)… undergo a mental evaluation,” the judge wrote.

The results of that evaluation have been sealed.

Berry was initially scheduled to go to trial on all six charges in May 2021. However, the case has been rescheduled multiple times, including in February.

In September, Circuit Judge Faye Peterson reduced the defendant’s total bond amount to $90,000, or $15,000 apiece for all six felony charges, under the condition that he lives with a relative in Brandon, be enrolled in school, and maintains all appointments with mental health professionals, according to court documents.

Late Saturday night, Berry and Trim were taken into custody by Hinds County sheriff’s deputies following a shooting at the Mississippi Mudbug Festival.

One person was killed in the incident and five others were injured, according to authorities.

The deceased was killed by a law enforcement officer, and was believed to be one of the shooters.

Remember, even the New York Times admitted 75 percent of mass shooters in America are black. [A Drumbeat of Multiple Shootings, but America Isn’t Listening, by Sharon LaFraniere, Daniela Porat and Agustin Armendariz, NYT, May 22, 2016].

And the Mudbug Festival in nearly 90 percent black Jackson, Mississippi was cancelled because of a black mass shooting.

You can have nice things or…realize Jim Crow wasn’t about discriminating against black people, but protecting the civilization white people built for their present and for their posterity.