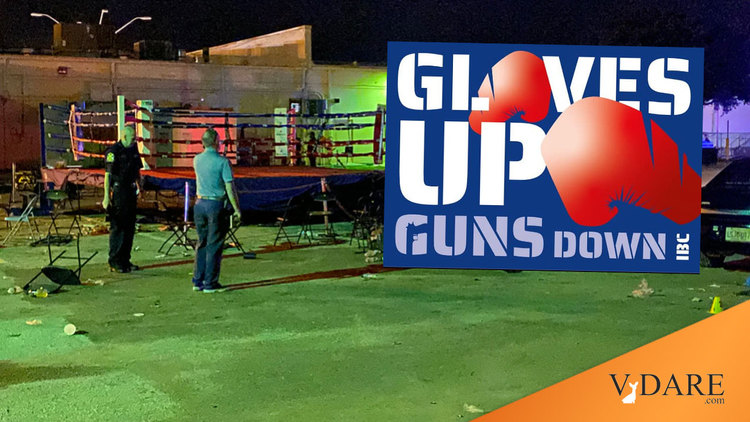 St. Petersburg "Guns Down, Gloves Up" Event To Stop Black-On-Black Gun Violence Ends With One Person Dead And Four Others Shot

St. Petersburg boxing match where shooting occurred was meant to address gun violence: One person died and another four were injured at the event on Saturday, by Michaela Mulligan, Tampa Bay Times, November 1, 2021 The Neighborhood Boxing League began in March with a mission to end gun violence. But a shooting at one of its events Saturday has its members distraught.

Pastor Elvis Piggott, an adviser to the league, called the shooting a slap in the face.

A group of young Black men in Tampa who have grown tired of the gun violence within their community created the Neighborhood Boxing League. The idea is to showcase a different form of conflict resolution in a controlled and refereed environment.

“They really felt destroyed, these guys and this movement,” Piggott said. “They felt hopeless and helpless.”

At 8:15 p.m. on Saturday, Police responded to the Skyway Plaza, 1079 62nd Ave. S, for a shooting, where a “temporary outdoor boxing ring” had been set up in a back parking lot, according to a news release from St. Petersburg police.

Multiple unknown people began shooting after the “unpermitted boxing match” grew heated, according to a police report. Arguments escalated over possible gambling and cheating, the report said. A spokesperson from St. Petersburg police said on Monday that officers were still investigating if a permit was necessary to box on the property.

Trevon Montrell Barton, 21, was shot during the incident. He died of his injuries at a local hospital, police said.

Four others were injured, and one of them is in critical condition, according to a police report.

The boxing match was between Tampa fighters and St. Petersburg fighters, Piggott said.

The league supports “Guns Down, Gloves Up,” a boxing movement that has taken root across the country as an alternative to gun violence.

“We’re basically letting it be known from the millennial generation to those under them that this is unacceptable,” Piggott said. “We’re not going to shoot up our neighborhood and we have to do better with that.”

St. Petersburg police have arrested one man, Robert Lee Cooley, 21, of Tampa, in connection with the incident. He’s charged with carrying a concealed firearm and discharge of a firearm in public. It wasn’t immediately clear if bullets from Cooley’s gun were the ones that killed and injured the victims, the arrest report states.

Cooley was released from the Pinellas County jail on $5,150 bail, records show.

Piggott says the shooting occurred after the boxing had finished.

Despite the violence, the league is planning more matches in the future, Piggott said, though the league also is looking into increasing security.

“The fight is very clear,” Piggott said. “If we can stop one individual from doing life in prison or one ending up dead, then (we have) done something.”

Just to confirm: an event created to keep black youth from shooting one another by instead participating in boxing matches had a mass shooting where one person died and four other people were shot.

By a black individual.

Again, gun control shouldn’t be about disarming law-abiding white gun owners, but being honest about who is committing the vast majority (disproportionate) of fatal/nonfatal gun violence in every city in America.

Even a boxing match set up to deter black youth from shooting one another ends with a black individual opening fire on other black people.