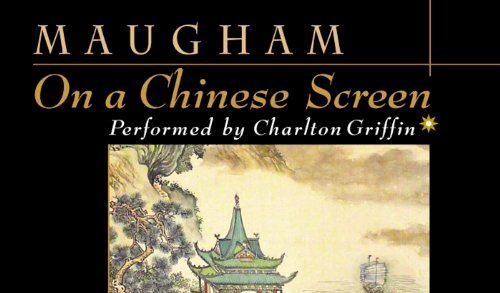 Yang Liu's EAST MEETS WEST—Going Through The Motions In China

There is much more to be said on all the points you mentioned about Yang Liu's neat little graphics.  Most of it has been said many times over by observers from one culture imbedded in the other, going back to the 16th century.

Here's one of my favorites, from Somerset Maugham, master of the Cold Eye. It is from notes Maugham took while traveling in China in 1920.  The notes were later gathered as a book: On A Chinese Screen.

It was a cold night. I had finished my dinner, and my boy was making up my bed while I sat over a brazier of burning charcoal. Most of the coolies had already settled themselves for the night in a room next to mine and through the thin matchboarding of the wall that separated us I heard a couple of them talk. Another party of travellers had arrived about an hour before and the small inn was full.

Suddenly there was a commotion and going to the door of my room to look out I saw three sedan chairs enter the courtyard. They were set down in front of me and from the first stepped out a stout Chinese of imposing aspect. He wore a long black robe of figured silk, lined with squirrel, and on his head a square fur cap.

He seemed taken aback when he saw me at the door of the principal guest chamber and turning to the landlord addressed him in authoritative tones.

It appeared that he was an official and he was much annoyed to find that the best apartment in the inn was already taken. He was told that but one room was available. It was small, with pallets covered with tumbled straw lining the walls, and was used as a rule only by coolies.

He flung into a violent passion and on a sudden arose a scene of the greatest animation. The official, his two companions, and his bearers exclaimed against the indignity which it was sought to thrust upon him, while the landlord and the servants of the inn argued, expostulated, and entreated. The official stormed and threatened.

For a few minutes the courtyard, so silent before, rang with the angry shouts; then, subsiding as quickly as it began, the hubbub ceased and the official went into the vacant room. Hot water was brought by a bedraggled servant, and presently the landlord followed with great bowls of steaming rice. All was once more quiet.

An hour later I went into the yard to stretch my legs for five minutes before going to bed and somewhat to my surprise, I came upon the stout official, a little while ago so pompous and self-important, seated at a table in the front of the inn with the most ragged of my coolies. They were chatting amicably and the official quietly smoked a water-pipe.

He had made all that to-do to give himself face, but having achieved his object was satisfied, and feeling the need of conversation had accepted the company of any coolie without a thought of social distinction. His manner was perfectly cordial and there was in it no trace of condescension. The coolie talked with him on an equal footing.

It seemed to me that this was true democracy. In the East man is man's equal in a sense you find neither in Europe nor in America. Position and wealth put a man in a relation of superiority to another that is purely adventitious, and they are no bar to sociability.

Teaching English idioms to Chinese students, I found that they seized with particular glee on the phrase "going through the motions."  Once they had learned it, it turned up in well-nigh every conversation thereafter.

Maugham's attempted explanation of this democratic attitude is . . . creative:

When I lay in my bed I asked myself why in the despotic East there should be between men an equality so much greater than in the free and democratic West, and was forced to the conclusion that the explanation must be sought in the cess-pool.

For in the West we are divided from our fellows by our sense of smell. The working man is our master, inclined to rule us with an iron hand, but it cannot be denied that he stinks: none can wonder at it, for a bath in the dawn when you have to hurry to your work before the factory bell rings is no pleasant thing, nor does heavy labour tend to sweetness; and you do not change your linen more than you can help when the week's washing must be done by a sharp-tongued wife.

I do not blame the working man because he stinks, but stink he does. It makes social intercourse difficult to persons of a sensitive nostril. The matutinal tub divides the classes more effectually than birth, wealth, or education. It is very significant that those novelists who have risen from the ranks of labour are apt to make it a symbol of class prejudice, and one of the most distinguished writers of our day always marks the rascals of his entertaining stories by the fact that they take a bath every morning.

Now, the Chinese live all their lives in the proximity of very nasty smells. They do not notice them. Their nostrils are blunted to the odours that assail the Europeans and so they can move on an equal footing with the tiller of the soil, the coolie, and the artisan.

I venture to think that the cess-pool is more necessary to democracy than parliamentary institutions. The invention of the "sanitary convenience" has destroyed the sense of equality in men. It is responsible for class hatred much more than the monopoly of capital in the hands of the few.

It is a tragic thought that the first man who pulled the plug of a water-closet with that negligent gesture rang the knell of democracy.

It's a matter of taste, I suppose, but personally I like the Chineseness of the Chinese.  I vented on that in my own 2001 China Diary:

I was stuck for an hour in Shanghai's spanking new Pudong airport, polished hallways stretching away to infinity, dainty boutiques with no customers (well, until Rosie turned up), soothing PA announcements read out by Stepford Wives in carefully precise Mandarin, Japanese and English.

I was soon overcome with a desperate desire to find something Chinese in this antiseptic place: a gob of spittle on the floor; a stinking toilet; a thick fug of cigarette smoke; a hilariously inscrutable sign translation (my favorites on this trip: NO STRIDING at a Suzhou park, and YOU ARE WELCOME TO GUILIN, on the road into that city from the airport); the rattle of mah-jong tiles; a yelling match with each party threatening gross sexual violation of the other's mother, grandmother, and female antecedents all the way back to the Age of Philosophers; a toddler with "split pants" crapping in a corner; or a clamorous restaurant with half-drunk patrons playing finger-guessing games at the tops of their voices.

Nothing, nothing: only smooth-skinned, Polo-shirted, Dockered, Rolexed, orthodontized Last Men floating to and fro, murmuring into their cell phones, on their way from one fool business conference to another. The toilets were spotless, the NO SMOKING signs scrupulously observed, the restaurant as genteel as an English West-Country tea-room, the signs translated into grammar so impeccable it would have made Prof. Jespersen swoon.

The feeling settled upon me, as it does rather often nowadays, that I am not going to like the twenty-first century very much. I began to lose the will to live.

Then, peeking into a service area off the main hall, I saw an airport worker taking a break, sitting on some sort of motorized flatbed trolley, smoking a cigarette and with his trouser legs rolled up!

Memo to the management of Pudong Airport: track down that man and give him a huge raise.

If you like this kind of thing, give Peirre Ryckmans' Hall of Uselessness a try.  I reviewed it here.