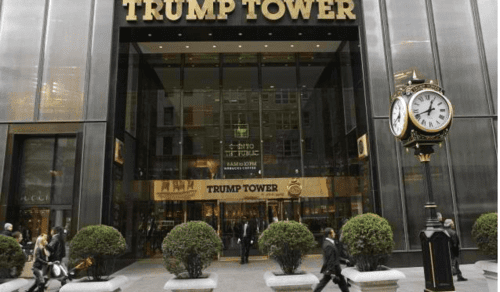 WSJ to Trump: Nice Little Business You Got Here, Shame if Anything Happened to It

Trump’s Ceiling Is His Wallet

Running for president is about to become a lot more expensive, and his business interests are vulnerable.

None of his offenses against propriety seem to have dinged the support that, in a crowded race, keeps Donald Trump atop the GOP primary polls.

… But unless we miss our guess, our long national nightmare-cum-sketch comedy show actually has a termination date. It will end the moment campaigning begins to threaten Mr. Trump’s finances and business interests.

Mr. Trump has gotten extraordinarily far based on free media plus a degree of self-funding that might come from petty cash. But he hasn’t shown even the willingness to spend the $44 million that Mitt Romney spent on his failed 2008 effort.

And assets that he could reasonably convert to cash are even less. Bloomberg puts the figure as low as $70 million, less than what several candidates in the race (Bush, Clinton, Cruz) and their super PACs already have raised.

And running is about to become a lot more expensive. When the campaign goes national after Iowa and New Hampshire, Mr. Trump would have to spend money on TV ads. To participate in widespread primaries and a convention fight he would have to hire staff. Mr. Trump, from day one, has likely never been down with any of that.

… Mr. Trump’s $3.7 million in “unsolicited donations” (average: $50) in the third quarter were nice, but these aren’t the makings of a major fundraising network even in the unlikely event that Mr. Trump could find an army of like-minded affluent Americans who want to support his campaign.

The second way he’s vulnerable is damage to his business interests. Mr. Trump has had an easy punching bag in the U.S. immigration system, which, at last count, was sufficiently incompetent that 12 million people reside in the U.S. illegally. To say Muslim immigration should be suspended until we’re sure we can tell who is a terrorist might seem reasonable on first glance.

But the idea becomes insupportable when you remember there are one billion Muslims in the world, and that many important U.S. business leaders and entrepreneurs and professionals are immigrants and can hardly be barred from departing and returning on a routine basis.

In any case, his comments have become an opening. Already Mr. Trump’s Middle Eastern business interests are under assault. He lost a few U.S. deals early on due to his slurs on Mexican-Americans. Now a handful of Silicon Valley biggies—the CEOs of Apple, Facebook and Google—have ventured criticism without mustering quite the courage to mention him by name.

Hasn’t Trump already been under this kind of corporate oligarch pressure for six months now? It may well eventually break him, but isn’t the real story, and the source of so much of the Establishment’s rage, that he’s endured longer than just about anybody else in our cautious, materialistic age?