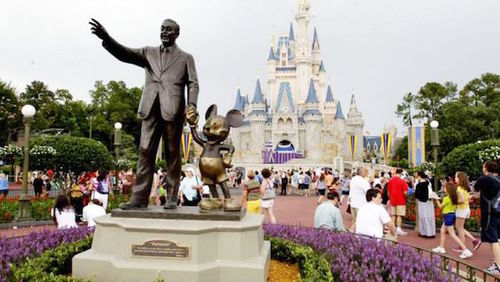 Welcome to the New Normal (jihad-style) in America, where daily life is increasingly constrained by safety concerns as never before because of Washington’s policy of Muslim immigration. The latest victim is the theme park, a popular family activity that remains somewhat affordable. But the new security measures, such as metal detector screening, will certainly add to the cost as well as the hassle.

It didn’t have to be this way. Muslim immigration was a relatively recent screw-up resulting from the 1965 opening of the diversity gates. The number of Middle Easterners residing here in 1970 was a manageable 200,000. Now it’s millions.

Fox News host Tucker Carlson had a succinct reaction to the “new normal” in an interview with a security expert:

“That’s not really the country a lot of us want to live in and this is the result of bad government policy: so the government imports people from refugee camps in Somalia and the rest of us have to go through metal detectors.”

More Muslims mean less freedom. It will only get worse.

For example, airline travel used to be relatively fun. You arrived at the airport, checked in and were headed for your destination in short order. Now the process takes an hour or two longer for all the security measures so Achmed won’t blow the thing up for allah.

Sports events are an attractive target, as shown by the close call in the Paris jihad of November: suicide bombers tried to enter the soccer match attended by President Hollande but were kept out, preventing an even worse massacre when an alert security guard found the explosive vest on one during a pat down.

London’s 2012 Olympics cost $2 billion for security and turned the city into an armed camp, with surface-to-air missile batteries installed on apartment buildings. By comparison, the pre-Islamic 1948 London Olympics required minimal policing for citizens to enjoy world-class athletics with no fear of Muslim killers.

How much longer can the Olympics survive given such enormous costs for Muslim diversity?

With Mexicans, you at least get burritos. Allah’s gangsters bring burqas, mass murder and a supremacist ideology.

ORLANDO, Fla. — Three major theme parks announced Thursday that they are adding security measures including metal detectors ahead of the busy holiday season.

Officials at Disney, Universal and SeaWorld’s Florida theme parks said all three parks will be using metal detector screening for guests as they enter.

In addition, Disney is discontinuing the sale of toy guns at both its Florida and California parks and will no longer allow those items to be brought in.

The moves come at a time when many public venues worldwide are stepping up security efforts to thwart possible terrorism or other attacks after recent violence in Paris and San Bernardino, California.

Disney will be randomly selecting guests for secondary screening but wouldn’t say how long the measures would be in place. Universal says its metal detector use is a test and won’t discuss specific future plans. SeaWorld says guests can expect bag checks and wand metal detector checks.

“We continually review our comprehensive approach to security and are implementing additional security measures, as appropriate,” Disney said in an emailed statement.

Disney is also no longer allowing guests 14 years and older to wear costumes into its parks. The change is to assist security personnel screen guests more effectively as they enter and while inside the parks.

Dan Gross, president of the Brady Campaign to Prevent Gun Violence, said in a statement that although the changes at the parks are being made with the safety of their guests in mind, it is disheartening that they have to be enacted.

“Now, families can’t even go to ‘The Happiest Place on Earth’ to escape the realities of gun violence in this country,” Gross said.

Disney doesn’t broadly discuss specifics about its security, but measures at Disney World have increased in recent weeks, in both visible and nonvisible ways for its visitors. There has been additional uniformed local law enforcement and specially trained dogs patrolling key areas.

Universal spokesman Tom Schroder said in an email that its security changes will apply to both Universal Orlando Resort and Universal Studios Hollywood. He said that it is a test and not a response to any specific concern.

“We want our guests to feel safe when they come here,” he said in a statement. “This test is a natural progression for us as we study best practices for security in today’s world.”

Metal detectors have previously been used by Universal to screen guests during its annual Halloween Horror Nights haunted house attraction.

Six Flags theme parks already require all guests to pass through metal detectors and undergo bag checks, according to its website.

SeaWorld spokeswoman Becca Bides said it stays in close communication with law enforcement at all levels regarding local, regional, national and world events.

“The safety of our guests and team members along with the welfare of our animals have always been our top priority,” SeaWorld said in a statement. “Like other major attractions and venues, we continually evaluate our existing comprehensive security plans.”