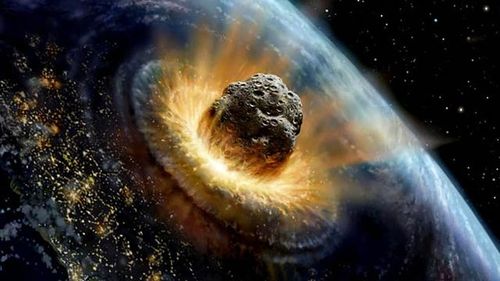 Write Letters! Without Pressure, American Pols Couldn't Rouse Themselves To Stop An Asteroid Hitting The Earth

As Thomas Sowell has written, "No one will really understand politics until they understand that politicians are not trying to solve our problems. They are trying to solve their own problems—of which getting elected and re-elected are number one and number two. Whatever is number three is far behind."

To such ends, a favorite tactic of many politicians is breast-beating and obfuscation until they've run the clock out, as parodied in the cartoon from 2002 displayed below. 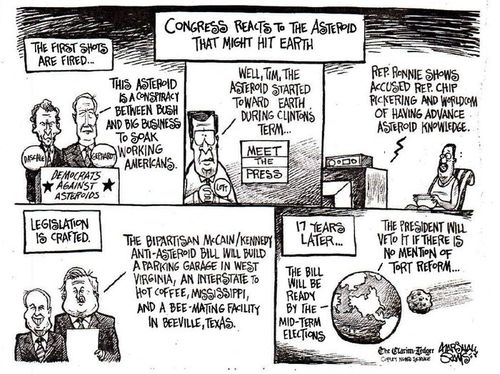 (I lifted the cartoon from the July 29, 2002 Orange County Register. But it originated at the Jackson, Mississippi Clarion-Ledger, undoubtedly accounting for the high concentration of Mississipians—Senator Trent Lott [R], Congressman Ronnie Shows [D], and Congressman Chip Pickering [R]—among the cartoon's lampoonees.)

For example, remember Kate Steinle?  Chances are, most VDARE.com readers do.  And for awhile there—but only if you were born yesterday—it seemed that some good for the country would result from the enormous individual tragedy of her murder by a five-times-previously-deported illegal alien.  Then Congress merely puttered a bit until it … ran out the clock.

In particular, there was a cloture vote in the Senate on October 20 that, if successful (i.e. at least 60 "Yea" votes), would have brought Senator David Vitter's [R-LA] S.2146 (Stop Sanctuary Policies and Protect Americans Act) to the floor for action.  At last!

But only 54 senators voted "Yea" (all Republicans except Mark Kirk [IL] and Lindsey Graham [SC; not voting], plus Democrats Joe Donnelly [IN] and Joe Manchin [WVA]), while 45 voted "Nay" (all other Democrats, Kirk, plus nominal "Independents" Bernard Sanders [VT] and Angus King [ME]).  You can find your senators' votes, grouped by state, at the bottom of this page.

Montana's Democratic Senator Jon Tester, narrowly re-elected in 2012, made some important votes against amnesty during his first term (in 2007 and 2010), but ever since, he's been useless or worse for the cause of immigration policy in the national interest.  So, naturally, he was one of the Gang of Forty-Five voting "Nay" on October 20.

Disgusted, I accessed the "biography" pages at Tester's Senate and (still-active) campaign websites, then used material from them in letters I dispatched to a couple of Montana's "big city" papers.  The Great Falls Tribune ran one of those letters, intact, on October 28 (not available online without a subscription):

Poor vote by Tester [Title supplied by the editors]

Kate Steinle was murdered in San Francisco in early July. The young woman’s alleged killer was illegal alien Francisco Sanchez, who’d already been deported five times, making his very presence in our country a federal felony.  But San Francisco is a sanctuary city for illegal aliens, so after local authorities decided against prosecuting Sanchez for an old drug crime, they simply turned him loose in April, instead of honoring a detainer request from Immigration and Customs Enforcement.  All the appalling details were presented by the San Francisco Chronicle in a July 3 article, “Pier shooting suspect had been released from S.F. Jail.”

Steinle’s death focused national outrage on the sanctuary-city folly.  Hundreds of U.S. cities, including Helena and Butte, fit the description, though many have policies less pernicious than San Francisco’s version.  For awhile, it seemed like Congress might actually do something to discourage this terrible practice, by reducing federal funding to cities that won’t cooperate with ICE.  But it took 97 days after Steinle’s murder until a bill, S.2146, finally materialized in the Senate, and 14 days later, the bill died, too.

Helping to kill the bill was Montana’s Sen. Jon Tester, who voted “no” on a procedural step that would have brought S.2146 up for debate, amendment, and a vote on final passage.  Judging from his Senate and still-current re-election websites, Tester’s disgraceful vote on S.2146 illustrates his personal version of “Montana values.”  That’s something to remember if he treats us to another re-election campaign in 2018.

And on October 31, the Billings Gazette published a shortened version of the different letter I'd sent to them:

Immediately after the young woman’s murder, it seemed that Congress would — finally! — do something to discourage sanctuary-city policies, by reducing federal funding to cities that won’t cooperate with ICE. But amazingly, it took 97 days after Steinle’s death until such a bill (S.2146) was introduced in the Senate. And then, 14 days later, the bill died, too.

Helping to kill the bill was Montana’s Sen. Jon Tester, who voted “no” on a procedural step that would have brought S.2146 up for debate, amendment, and a vote on final passage. Tester’s Senate and (still-active) campaign websites gush about “responsibility,” “accountability” and his love for “Montana values.” So his callous vote on S.2146 must demonstrate his version of those values. That’s something to remember if he offers himself for re-election again in 2018.

Writing such letters-to-editors is work, especially so if one has to craft different letters on the same subject for dispatch to different newspapers.  (The editors at the Great Falls Trib always phone to check authorship of letters submitted to them and always ask if the letter was—against their rules—also submitted anywhere else.  I don't want to lie and, thereby, blow my credibility with them.)

And if you're targeting a "big" paper such as the Los Angeles Times, the Washington Post, or the Chicago Tribune, it's hard work, because you have to hew to very restrictive word-count limits and write it well enough that it shines among a deluge of letters.  (In contrast, the Great Falls Trib publishes all non-libelous letters submitted [250 words, maximum], and my success rate with the Billings Gazette is pretty high, too.)

Yep, a lot of work.  So why go through the agony?  Several years ago, writing at National Review Online, Kevin Williamson explained why:

Funny what catches the notice of politicians. I was a newspaper editor for years, and I’ve had at least a dozen politicians tell me: “We don’t really give a damn what you write about us in the editorials. We don’t even really read them. But if we start seeing letters to the editor, we notice. Any time one constituent is ticked-off enough to take the time to write a letter, that’s significant. One guy writing a letter means that there are 500 more who agree but don’t take the time to write.” One guy writing a letter represents a few hundred people in the mind of Joe Congressman.

Scourging feckless politicians in print—or at least provoking some guilty dismay, as I hope my letters did with Tester and his staffers—is but a mild version of what gubernatorial candidate Willie Stark, one of the principal characters in Robert Penn Warren's famous 1946 novel All the King's Men, recommended to citizens in a speech on the hustings:

p.s. A different anti-sanctuary-city bill ("Kate's Law") died in the Senate on November 4 at the hands of Minority Leader Harry Reid [D-NV].  Details are here.