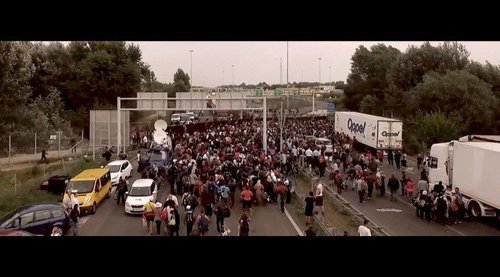 Reposting WITH OPEN GATES: Powerful Video Of The Invasion Of Europe

I did a post called With Open Gates: Powerful Video Of The Invasion Of Europe, about a video compiling images of what the "migrant" invasion is actually like.

I wrote that "This video, from YouTube Channel "The Death Of Nations" is a powerful compilation of European MSM video of the invasion:With Open Gates: The forced collective suicide of European nations."

The original YouTube poster said "This video will not be online long, download and mirror it while you can." I just updated that post with this:

UPDATE: The video, as predicted, was taken down, but we've reposted it. Breitbart says that "After gaining a million and a half views in less than five days, the Open Gates video was taken down by YouTube following a copyright infringement. Although the rights company involved in the claim has been named in allegedly spurious claims in the past, there is no reason to suggest that is the case with this video. This article now links to a video mirror on Dutch website Dumpert."

Here it is—watch it, if you didn't the first time.