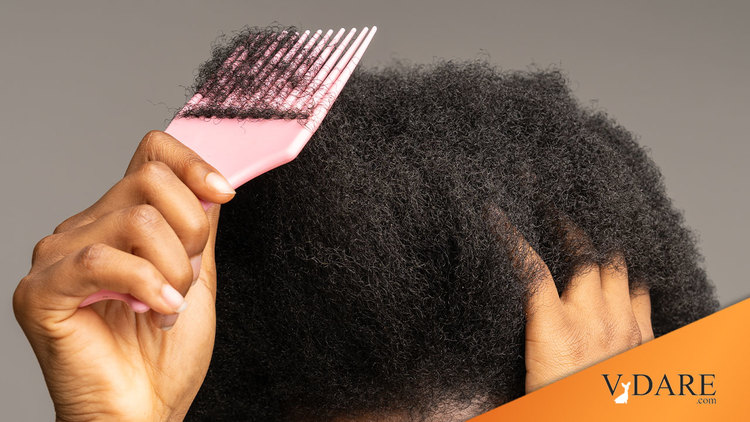 World War Hair Gets Federal Support With The CROWNH Act

Our Congress may be shirking its constitutional duties, but never let it be said the congresscritters sit around idle. Not at all—they keep themselves busy.

Last Friday, for example, the House of Representatives passed the Creating a Respectful and Open World for Natural Hair Act. This is one of those dumb acronyms: C-R-O-W-N-H spells "crown," see? Well, actually it doesn't, not with that "h" at the end there; but, as the "Duke" told the "King" in Huckleberry Finn, quote: "these country jakes won't ever think of that."

So what does it do, this CROWNH Act? Allow the lead sponsor of the bill, Representative Bonnie Watson Coleman of New Jersey, to explain. Quote:

There are folks in this society who think because your hair is kinky, it is braided, it is in knots or it is not straightened blond and light brown, that you somehow are not worthy of access.

Apparently there was a case four years ago of a high school wrestler being forced to cut his dreadlocks or forfeit his match. He was of course black, although it looks like the real victim was the white referee charged with enforcing the (race-neutral) safety rule regarding hair length:

The white referee who forced a Black high school wrestler to cut off his dreadlocks or forfeit a match filed a legal motion claiming emotional distress and $100K in damages.

He is currently being investigated and is barred from officiating matches. pic.twitter.com/l5chuBbAX0

Referring to that case, Rep. Coleman gushed that, quote:

This bill is vitally important. It's important to the young girls and the young boys who have to cut their hair in the middle of a wrestling match in front of everyone because some white referee says that your hair is inappropriate to engage in your match.

Foreigners are pouring unchecked across our borders; our own tech workers are being laid off so their jobs can be given to cheaper guest workers from abroad; our big-city police forces have been stood down so that criminals can roam free; the annual inflation rate is heading for ten percent; we're begging for oil from the Russians, Iranians, and Arabs, having shut down our own production from plain spite; but banning discrimination based on hairstyle is vitally important.

All 221 Democrats present voted for this CROWNH Act, along with—wait for it—fourteen Republicans. It now goes to the Senate, who I am sure will give it their most earnest consideration and pass it, with support from the usual GOP suspects: Mitt Romney, Lisa Murkowski, Ben Sasse, Susan Collins,… President Biden has already said he'll sign it.