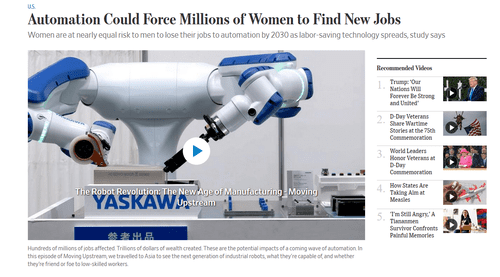 This is a somewhat curious article from the Wall Street Journal because of course women will lose employment when automation takes hold since many millions of women work. The piece uses a new McKinsey study, The Future of Women at Work, that specifically notes, “Women and men face a similar scale of potential job losses and gains, but in different areas.”

So the focus on women does supply a specific sub-topic of automation to explore.

Robot sales continue to rise, so there is no sign of the smart machine wave disappearing. In fact, when machines become cheaper than workers to perform a task, the humans will be replaced. 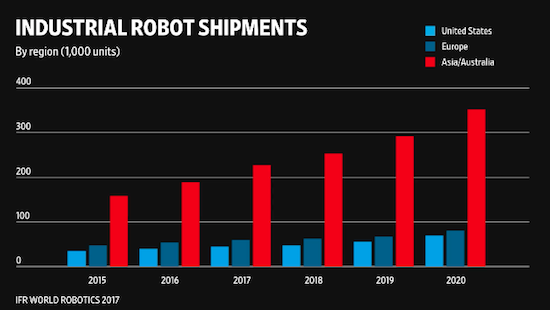 That’s how capitalism works, and it’s one reason why Jeff Bezos is the richest man on earth — he was an early adopter of warehouse automation which has helped his Amazon store enormously.

The article includes a fascinating video with an interview of Chinese businessman Michael Zeng who assures the interviewer that his layoff of 700 will be no problem because the workers will be able to find new employment.

Perhaps it’s true that jobs are plentiful in Red China now, but tech experts forecast a future of worsening unemployment from automation and artificial intelligence for the world economy. Oxford researchers forecast in 2013 that nearly half of American jobs were vulnerable to machine or software replacement within 20 years. Rice University computer scientist Moshe Vardi believes that in 30 years humans will become largely obsolete, and world joblessness will reach 50 percent. The Gartner tech advising company believes that one-third of jobs will be done by machines by 2025. The consultancy firm PwC published a report last year that forecast robots could take 38 percent of US jobs by 2030. In November 2017, the McKinsey Global Institute reported that automation “could displace up to 800 million workers — 30 percent of the global workforce — by 2030.” Forrester Research estimates that robots and artificial intelligence could eliminate nearly 25 million jobs in the United States over the next decade, but it should create nearly 15 million positions, resulting in a loss of 10 million US jobs. Kai-Fu Lee, the venture capitalist and author of AI Superpowers: China, Silicon Valley, and the New World Order, forecast on CBS’ Sixty Minutes about automation and artificial intelligence: “in 15 years, that’s going to displace about 40 percent of the jobs in the world.” A February 2018 paper from Bain & Company, Labor 2030, predicted, “By the end of the 2020s, automation may eliminate 20% to 25% of current jobs.”

As a result, it’s unwise for America to be admitting more than 100,000 unskilled Hondurans etc. per month to perform jobs that mostly won’t exist in a few years.

Women are at nearly equal risk to men to lose their jobs to automation by 2030 as labor-saving technology spreads, study says

Automation could force more than 100 million women globally to find new occupations by 2030, according to a study from McKinsey Global Institute.

And that technology could change the jobs done by women in the way robotic arms in factories put downward pressure on mostly male manufacturing jobs in the U.S. in recent decades.

“The new wave of automation is much more than manufacturing and robots,” she said in an interview. “The sectors and occupations for which automation will play a role will vary widely and women could be equally impacted as men.”

The McKinsey study isn’t projecting mass job loss due to automation. It forecasts that 171 million new jobs held by women will be created by 2030—and the rate of job growth could be slightly larger for women than for men over that time period. That is largely because women hold the majority of jobs in one of the fastest-growing fields: health care.

The study considers the number of full-time equivalent jobs at risk, allowing that many jobs will be partially automated. For example, a nurse may spend less time in the future on data entry as smart diagnostic machines and voice-recognition technology improve.

In developed countries, a larger share of jobs are on the line. In the U.S., 24% of female jobs and 26% of male jobs are at risk to automation, McKinsey said. (Continues)