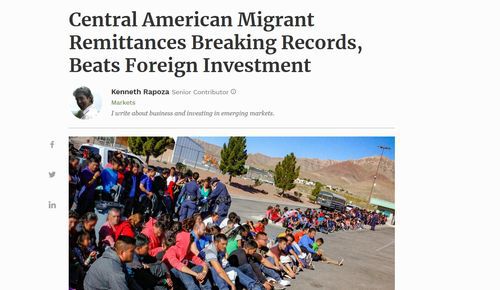 FORBES on Central American Remittances and the Border Situation

Either migrants are making more money than ever before, or their numbers are increasing even as economists like Paul Krugman insist the border crisis only exists in President Donald Trump's head. Central Americans are sending home billions of dollars, giving poor governments there little incentive to improve social safety nets for the working class leaving for the U.S.

The remittances provide "little incentive" for  Central American governments "to improve social safety nets", or to improve their economies, for that matter.

Then Rapoza breaks it down by country.

In 2017, El Salvador brought in a record $792 million from foreign direct investment, according to the United Nations Conference on Trade and Development, or UNCTAD. It is unclear if that includes remittances from their people living abroad. If it did, or if it did not it doesn't matter here. El Salvadoreans sent home a record breaking $534.2 million as of December 2018, according to that country's central bank.

Guatemala FDI was $1.14 billion in 2017. That's chump change compared to what their foreign workers are sending home to family. Last year, they sent a record breaking $9.3 billion in remittances, according to the Bank of Guatemala.

And then there's Honduras, the next group of Central American countries populating migrant caravans heading to the U.S. border in numbers never before seen. FDI to Honduras was $1.18 billion in 2017, according to UNCTAD. Remittances were $427 million in December after hitting a record 12-month high of $456 million in May.

This next paragraph pretty much sums up the situation:

The dependence of these small nations on migrants to sustain the livelihood of some of the population has led these countries to do little to stop an ever increasing outflow from Central America. There is very little political will to solve this crisis. Trump's "tough love" policy at least gets nations thinking about it.

Mexico is a much bigger economy than Guatemala, El Salvador and Honduras put together.

Mexico's trade relationship with the U.S. helps. And its large domestic market cannot be compared to tiny Central American countries. For instance, Mexico brought in $22.8 billion in FDI in 2017, based on UNCTAD's numbers while their all-time remittance high, reached in 2018, was $9.05 billion, according to their central bank.

Although remittances only make up 3% of Mexico's GDP, they sure don't want to give them up.

Mexico's remittances are worth more than Pemex oil and gas sales.

"Immigration from Central America is not new to Mexico, but the magnitude of it is new. Mexico has its own problem on how to deal with this issue, enforce its laws and use the limited resources they have in order to care for all these new immigrants," says Joel Virgen Rojano, the Mexico economist for BNP Paribas.

Something's got to be done about the U.S. border.

The current influx of illegal crossings into the United States from Mexico is overwhelming the resources of Customs and Border Patrol and the Department of Homeland Security. Over the past 21 days, an average of over 4,500 people have crossed into the U.S. illegally, or arrived at ports of entry without documents, acting Secretary of the Department of Homeland Security, Kevin McAleenan, said last night in a press call.

Contrast that to May of 2017, when Trump had only been president a few months.

Thursday [May 30,2019] saw a single group of 1,036 people, some with unaccompanied children, walking across the Texas border from Juárez, Mexico. It was the largest group ever apprehended at the border.

How many are in custody?

U.S. immigration authorities have over 80,000 people in custody, a record level pushing holding facilities to their limits.

Over 7,500 single adults are in custody at the border and Immigration and Customs Enforcement is holding over 50,000 people who have crossed on foot into the United States.

President Trump, things need to turn around as soon as possible.

Failure to Control the BorderRemittances
<< Previous
Next >>
LATEST