Women And Children First? Not On Sinking Italian Cruise Ships 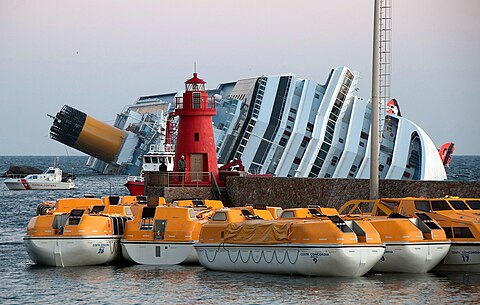 Steve Sailer asks if the failure of the of the Captain  (and passengers)  on the Costa Concordia to behave like the those on the RMS Titanic in a much more dangerous situation is the product "change in the cultural atmosphere in recent generations," and answers "the sample size is too small to tell.".

However, when you consider the fact that on the 1912 Titanic, the crew and  passengers were phlegmatic Edwardian Britons, and the 2011 passengers and crew modern-day Italians, there the sample is not too small to tell. Compare the record of the Royal Navy to that of the Itallian Navy, with its glass-bottomed boats.

"...I learned that there is a great deal of debate over the failure of the “women and children first” rule to apply to the crash of the Costa Concordia.  It would appear that the consensus opinion is that either: (a) this is evidence of the coarsening of society in the hundred years since the wreck of the Titanic, or (b) this is evidence of the “victory” of the women’s right movement to overcome not just the barriers of sexism, but also its protections.

I would like to suggest a third reason, but one that is no less troubling in its implications:  the chaos came about because it was an Italian ship."

Exactly. This is the point that Steve was making about Hurricane Katrina when he said "In contrast to New Orleans, there was only minimal looting after the horrendous 1995 earthquake in Kobe, Japan—because, when you get down to it, Japanese aren't blacks."

It's a point I made myself  when a libertarian, after the Japanese tsunami/nuclear accident,  compared the panicky reactions of fictional Japanese in a Godzilla movie to the calm and cooperation that actually occurred when Japan had a Godzilla scale disaster.

Reason's Jesse Walker said "Human beings tend to be far more calm and resourceful in an emergency than the movies — and far too much of the news media — will ordinarily admit," to which I replied "Well, yes, calmness and resourcefulness is typical...of Japan. "

Bob Krumm, above, goes on to say

"To those who view this weekend’s catastrophe as evidence of the end of civility, I say, cheer up.  Had it been a German or British ship that went down in the North Sea, I submit that the scene would have been far more reminiscent of the Titanic’s “women and children first” rule, than the chaos of the Costa Concordia."