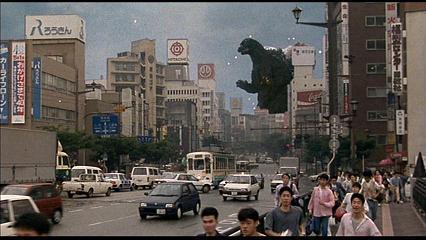 On Reason.com, Jesse Walker compares the panicky reactions of fictional Japanese in a Godzilla movie to the stoic reactions(below) of real-life Japanese to the latest earthquake/tidal wave activity, saying

"Human beings tend to be far more calm and resourceful in an emergency than the movies — and far too much of the news media — will ordinarily admit. Unfortunately, officials often make decisions with Godzilla's footprint on their mind, withholding important information from the public for fear of "spreading panic."[Godzilla vs. Real Life - Hit & Run : Reason Magazine]

The refusal of Japanese to panic and run is what made the War In The Pacific so long and hard, Iwo Jima in particular. George Macdonald Fraser was in Burma in 1945, and the first time he heard that SIX individual Japanese had come out of a bunker with their hands up, some of his comrades refused to believe it.

But it's also made their reaction to natural disasters much more orderly and peaceful than what the United States experienced after Katrina. Here's a video of that:

Steve Sailer wrote about this after Katrina, in a passage that's frequently been quoted against us, as if it were not only evil, but wrong:

"In contrast to New Orleans, there was only minimal looting after the horrendous 1995 earthquake in Kobe, Japan-because, when you get down to it, Japanese aren't blacks. For example, the per capita imprisonment rate for Asian-Americans is about 1/30th that of African-Americans. Nor is it surprising that the black refugees at the Superdome and the convention center failed to get themselves organized to make conditions more livable. Poor black people seldom cooperate well with each other because they don't trust other blacks much, for the perfectly rational reason that they commit large numbers of crimes against each other."

This passage was included in John Hawkins's The 40 Most Obnoxious Quotes For 2005.—at the time he called it Racist Commentary On Hurricane Katrina. And Hawkins of RightWingNews is actually fairly conservative.  The reactions of liberals at MediaMatters and the SPLC, and neoconservatives like John Podhoretz was even more extreme. But I've received a number of emails asking if the Japanese are acting like Katrina refugees yet. The answer continues to be no.