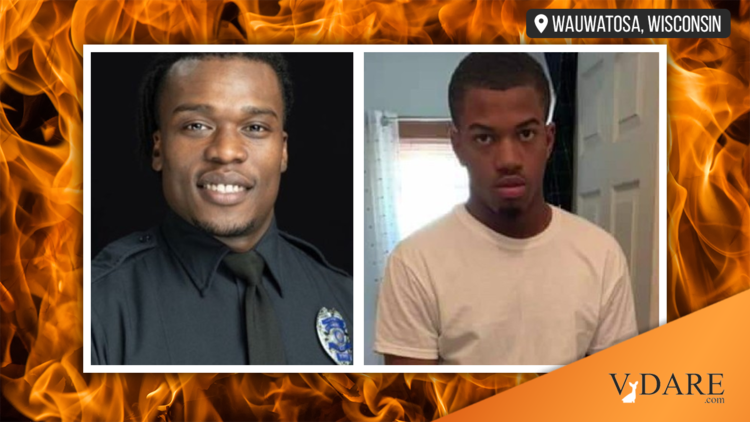 Earlier, by Ann Coulter: Would It Kill You To Hire More Black Cops? (Yes)

From the Milwaukee Journal-Sentinel:

Joseph Mensah, that must be one of those white Catholic ethnic names they have so many of in Wisconsin, right?

Alvin Cole was a black teen who, in a confrontation with security guards and Officer Mensah at a mall, pulled a gun, which went off (perhaps accidentally), after which Mensah killed him.

Interestingly, this was the third Person of Color that Officer Mensah had killed in a half decade.

It was announced today that no criminal charges would be filed against Mensah, but an outside investigator recommended his firing on the grounds, to paraphrase The Importance of Being Earnest, that to shoot one perp, Mr. Mensah, may be regarded as a misfortune; to shoot two perps looks like carelessness; and to shoot three perps looks like a pattern.

Anticipating unrest, the City of Wauwatosa has shut down City Hall for three days, with plans to reopen Monday. Tosa schools have also shifted to an all-virtual model for the rest of the week.

RELATED: Outside investigator: Tosa officer should be fired, citing ‘extraordinary’ risk of a fourth fatal shooting

RELATED:Officers are rarely charged with shootings in Milwaukee County. It’s even rarer for them to be convicted.

They were directed toward the off-ramp at 25th Street. Milwaukee County Sheriff’s deputies told marchers they could be arrested if they stayed on the interstate, according to one livestream.

Deputies stopped traffic at the 25th Street exit. It was not immediately clear if anyone was arrested. The marchers were trailed by a caravan of vehicles. ….

In a statement from Tosa Together, Indivisible Tosa and Tosa Moms Tackling Racism: “It is with great disappointment that we see our city being closed down out of fear and distrust of what might happen.”

Several businesses and government offices in Wauwatosa closed early Wednesday in anticipation of unrest or violence, some even boarding up windows. Gov. Tony Evers authorized the Wisconsin National Guard to support local police in Wauwatosa, and military vehicles were outside Mayfair Mall Wednesday afternoon.

“Outside agitators are a concern, but the expected sharp escalation in militarized police practices is vastly disproportionate,” the groups said in a statement.

“Our mayor has decided to take actions this week that show how much control the police have. They show the escalatory tactics that our police department utilizes when controlled by fear and implicit bias against people of color.”

Curfew in Wauwatosa from 7 p.m. to 6 a.m. because of worries about unrest
The City of Wauwatosa issued a 7 p.m. to 6 a.m. curfew starting tonight through Monday. Officials cautioned people to stay home between these hours except for those going to or from work, such as government officials, social service workers, and credentialed members of the press.

… Gasoline stations are closing between the curfew hours. Gas stations and hardware stores are prohibited from displaying and selling materials which could be used to start or accelerate the burning of buildings or the containers used to transport and dispense such materials.

Oh, by the way, here is a photo of Officer Joseph Mensah and the three guys he has killed:

No matter the precise details, we can rest assured that Systemic White Racism is to blame.