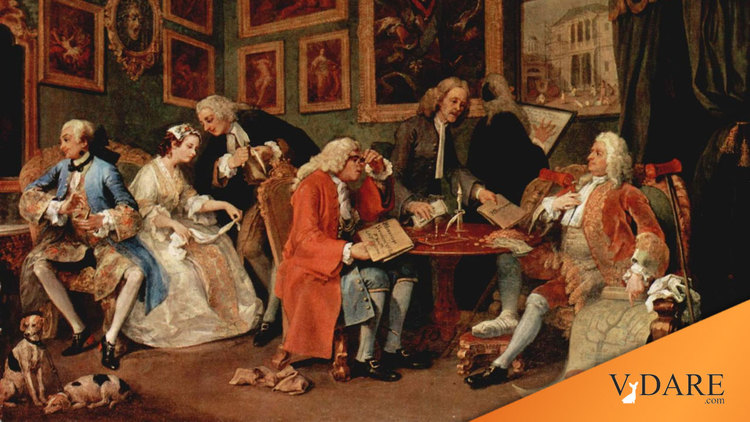 William Hogarth was the great satirical painter and printmaker of 18th century England. He was, arguably, the first political cartoonist and, perhaps, the inventor of the comic strip. He’s a little like if Norman Rockwell had started out not as an illustrator but as a traditional easel painter, then got into comic drawings for reproductions that became massively popular, but with sharper satirical elbows than Rockwell.

Hogarth was so influential that English-speaking political cartoonists tended to follow his style of cramming huge amounts of amusing detail into their caricatures for generations until everybody finally got sick of that look.

One of Hogarth’s social reform crusades (in conjunction with his friend Henry Fielding, author of Tom Jones) was to encourage the English to drink beer, with its lower alcohol and greater nutritional value, rather than gin. Thus his prosperous “Beer Street,” where native English ale is quaffed, vs. slovenly “Gin Lane,” where alcoholics overindulge in Dutch-derived spirits:

But these days, the new exhibition of Hogarth’s works at the Tate Britain Museum comes with a trigger warning:

Apparently Hogarth reveals "the entrenchment of racist, sexist and xenophobic stereotypes". Rather astonishing for an eighteenth century caricaturist... who would have thought it? pic.twitter.com/Qr9TuqkM3q