The Obama Regime has finally found another illegal alien that it wants to deport.  The last alien it wanted to deport was an anti-communist hero of the War in Central America in the United States legally, Jose Guillermo Garcia, former Defense Minister of El Salvador under the democratic administration of Jose Duarte.  In this case it is a naked official, Yang Xiuzhu, using the United States and other Western nations to hide her stolen wealth, and using political asylum to shield her from deportation.

China’s ‘Most Wanted’ Fugitive Nears Deportation From US 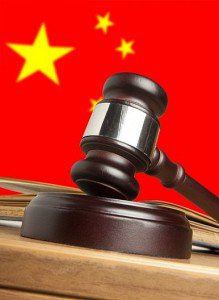 China’s “most wanted” economic fugitive appeared in a U.S. immigration court on Tuesday, bringing her one step closer to repatriation and trial in China.

Yang Xiuzhu, the former vice mayor of Wenzhou city in Zhejiang Province, is accused of accepting 253 million RMB ($41 million) in bribes. She fled China in 2003, soon after authorities began investigating her. In May 2014, Yang was detained in the Netherlands, which was preparing to send her back to China. Yang managed to escape and tried to make her way to the United States. She was detained again, this time by U.S. immigration officers, in June 2014, reportedly while trying to enter the U.S. from Canada using a fake passport. Chinese media reports say Chinese law enforcement tipped off U.S. officers about Yang’s travel plans.

Yang, like many other Chinese officials, is claiming political asylum as protection.

That doesn’t mean Yang is guaranteed to win her asylum bid – a similar ploy failed in the Netherlands. But it will make her repatriation a drawn-out legal affair. A Xinhua article spoke of Chinese suspects in the West using “complex regulations on extradition and jurisdiction to their advantage” and called for “more international cooperation” on corruption cases. Xinhua was mostly upbeat, however: “Despite cross-border coordination difficulties, the [possible] deportation from the U.S. of the woman who tops China’s 100 most wanted list speaks volumes of the success of international collaboration on eradicating corruption.”

Yang is not the only Chinese fugitive facing legal action in the United States. Qiao Jianjun, who comes in at number three on China’s most wanted list, entered the United States in 2011 along with his former wife, Zhao Shilian. Zhao has since been detained on charges of lying on her visa application with an intent to launder money. Qiao, though indicted on the same charges, escaped arrest and his whereabouts are unknown.

Qiu Gengmin, another name from China’s 100 most wanted list, is facing trial in the United States for money laundering. His lawyer told the New York Times that Qiu is being persecuted by the Chinese government for leading a pro-democracy movement. He is seeking political asylum.

This article might be optimistic, as Yang is facing only her first hearing in a drawn out asylum system that the Obama Regime is currently also using to shield Central American illegal aliens from deportation.  Approvals of asylum claims have skyrocketed under the Obama Regime and China may yet be disappointed in its fox hunt for their corrupt bureaucrats.  And more will be coming as the Obama Regime lessens security at the borders and at American diplomatic posts in China issuing visas to the naked officials.  On one hand the Obama Regime giveth and the other hand  (might ) taketh away, but the end result is many more Red Chinese entering with a visa and living in the United States illegally.