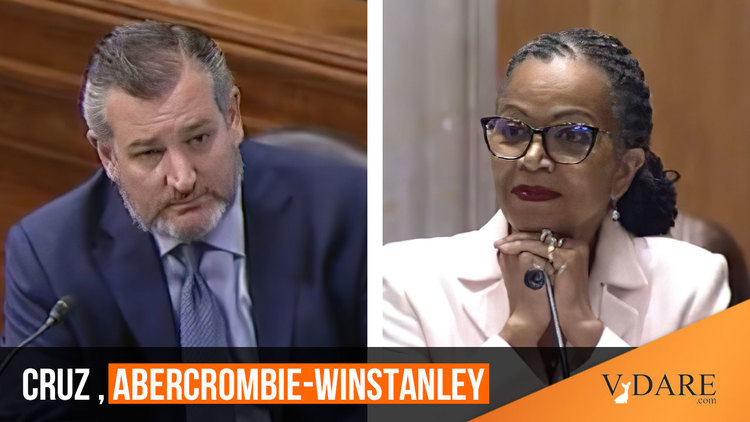 In 2022, Discrimination Against Hiring Straight White Men Is SOP For Biden's State Department

Why should straight white male support the United States of America in 2022, when the State Department has a Diversity and Inclusion officer who has allegedly sent email excluding non-homosexual white males from employment in her department?

The senator argued Tuesday that the department’s Equity Action Plan, which changed hiring practices at the agency, is “nothing more than brazen discrimination.” An email from a senior department official described reports from candidates claiming to be denied a position for having a disability or for classifying as “white men, straight white men, [or] not [being] of the right religion.”

“Did you clear this guidance?” Cruz asked during the Senate Judiciary Committee hearing on “diversity, equity and inclusion.”

“So you didn’t know it had been sent,” Cruz clarified.

“This is the first time I’m seeing it, sir,” she said.

The senator suspected that a person not being of the “right religion” pertains to Christians. He pressed her if she is aware that these hiring practices are allegedly occurring inside the State Department, to which she responded that they are not.

“So do you believe the senior state department official who sent this email was lying?” he asked.

“So you’re the chief diversity officer and you are arguing you are certain discrimination is not happening at the state department, is that right? Is that what you’re testifying? It’s what you just said.”

Abercrombie-Winstanley said the State Department is not intentionally breaking the law, though there are members of the agency that “discriminate,” “harass,” and “bully,” therefore leading to the creation of programs to hold individuals practicing discriminatory actions accountable.

The senator said she called for Diversity, Equity and Inclusion and Accessibility hiring practices, though she claimed she was unaware of the instructions in the email.

“What would you say you do around here?” the senator said. “What is your job if not to stop discrimination, and unfortunately, I believe your job, in practice, is encouraging this discrimination. This is a manifestation … is it good for the State Department and good for the United States government to be actively discriminating based on disability, based on race, based on being a straight white man, or based on not being the right religion, it that good or bad?”

“Indeed, and so I would say comments do not at all say it is indeed happening,” she said.

The credibility of the United States of America, under domination by the insidious ideology known as Diversity, Inclusion, and Equity (DIE), is choking what made our nation great and jeopardizing all our ancestors built since 1776 for their posterity.

Unfortunately, our Founding Fathers posterity are indentured servants to the concept of DIE, where white people alive today must be constantly judged by the nefarious actions of their ancestors and immediately deemed iniquitous for the sin of being born white.

This will only last as long as white individuals collectively stay on their knees. The earth is literally going to shake when implicit whiteness becomes implicit. It’s stories like this bringing us one step closer to this inevitability.