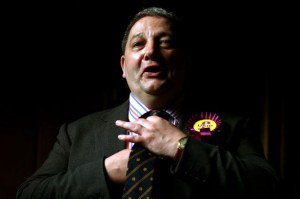 All this is distinctly reminiscent of the brilliant Dutch immigration patriot leader Pim Fortuyn, who was murdered in 2002 as his party stood on the verge of victory, to the complete indifference (if not positive approval) of Europe’s ruling class. As Steve Sailer predicted, the murderer was belatedly and reluctantly revealed to be an immigration enthusiast; he was recently released after only 12 years in jail.

Funny thing, although there’s usually endless MSM hoopla about the first gay whatever, I don’t see any celebration of Coburn in the US.

Apparently, he doesn’t fit the agenda.

But maybe that’s about to change. Coburn has criticized homosexual marriage ("I think it does the gay community no good whatever to cross the street to pick a fight with people of faith") and this does fit the Political Correctness enforcers’ agenda of repression-through-point-‘n’-splutter: Gay Ukip MEP David Coburn in Homophobic Storm Over Same-Sex Marriage Claim, by Dominic Gover, International Business Times UK, May 28, 2014