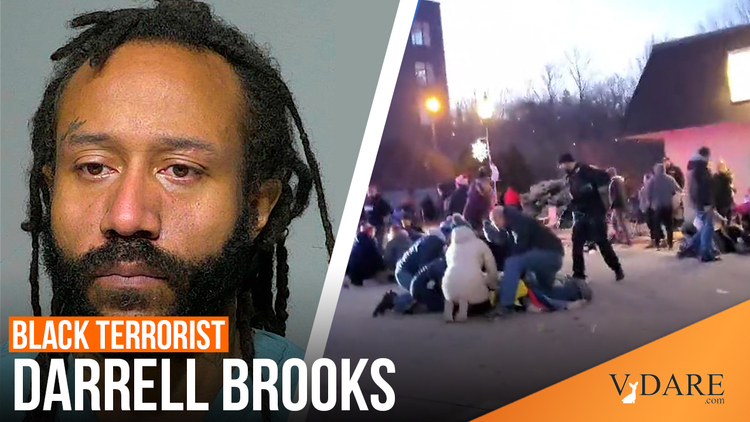 Why No Hate Crime Charges Against Darrell Brooks?

If you are paying attention to the Main Stream Media, you may have missed it. However, Darrell Brooks, the man behind the Waukesha massacre, was found guilty of first-degree intentional homicide, as well as other charges. The verdict comes at the end of a trial that can only be described as a twisted farce, with Brooks repeatedly plunging the court into absurdity as he represented himself. He used nonsensical legal theories as if they would allow him to escape responsibility, refusing to answer simple questions. Anastasia Katz at American Renaissance has provided exhaustive coverage of the trial, including the way it finally ended.

Each side was given one hour for closings. When the jury entered, Judge Dorow mentioned race for the first and only time in the entire trial. She read out instructions to the jury, telling them not to engage in implicit bias due to such things as race, religion, or national origin. She read these instructions with no fanfare and without comment of any kind from either Mr. Brooks or the prosecution...

The jury entered and read the verdict: guilty on all counts. At the second count of “guilty” of first-degree homicide, a man in the gallery shouted, “Burn in hell, you piece of shit!”

It’s important to note that Brooks was not just convicted of six charges. He was convicted of about 76 charges, including battery of his ex-girlfriend [Darrell Brooks was found guilty on 76 charges in his trial in the Waukesha Christmas Parade attack. This is all of them, by Christopher Kuhugan, Milwaukee Journal Sentinel, October 26, 2022].

However, none of these charges were hate crime charges against white people. It’s a dramatic difference between the way the media and the government, including the Department of Justice under Attorney General Jeff Sessions, treated James Fields. This is not to say that James Fields did nothing wrong. Yet it stretches credulity to say that Fields, under threat, acted with more malice than Brooks. For one, Fields slammed on the brakes after hitting the crowd. Brooks just kept on going.

Fields was partially convicted because he posted racist material that law enforcement, judge, and jury thought reflected on his mindset and his actions that day. When the Obama Administration’s Department of Justice investigated George Zimmerman’s shooting of Trayvon Martin, it investigated his life for evidence of racism [Justice Dept. won’t pursue Zimmerman charges, by Adam Lerner, Politico, February 24, 2015]. It found none, though the definition of racism has dramatically expanded in the years since. Had the DOJ found racist posts or writings by Zimmerman, he may have been charged with conspiring to violate Trayvon Martin’s civil rights.

Why wasn’t Darrell Brooks charged with a hate crime? Let’s hear no nonsense about not wanting to divide the community. Our rulers are still rubbing the raw the wound of the Emmett Till lynching, even creating an ”alert” system so people can be on the lookout for violence against black child care centers. There is a massive effort to create a new Tulsa Massacre industry, even though there seems to be some trouble determining whether bodies found in a grave were actually linked to the massacre. ”City officials have said previously that it is still to be determined whether the burials are associated with the 1921 Tulsa Race Massacre” [Twelve more coffins found in search for Tulsa Race Massacre graves, by DeNeen L. Brown, Washington Post, October 28, 2022]. ”Weaponizing” grievances, even grievances from more than a century ago, is what our rulers do.

Clearly, the System is not interested in having us just get along. Certain racial resentments are encouraged and even subsidized. However, when whites are the victims, we are told that it is simply ”random,” almost like a natural accident, something that is just part and parcel of modern life [Are all murders by blacks now ”random,” by Lawrence Auster, View From The Right, December 11, 2012]. In reality, there is a deliberately cultivated climate of anti-white hatred and it manifests in whites being disproportionately the victims of crimes.

There shouldn’t even be ”hate crimes.” However, given that they are a reality, they must be enforced equally. Darrell Brooks posted violent anti-white rap, which he explicitly linked to Malcolm X and others who are now hailed by our rulers as heroes.  “In the spirit of Malcolm, Nat Turner, Marcus Garvey, and everybody that died for freedom in this country whether white or black, and everybody that stand against white supremacy in this country, let’s get it,” he said [Waukesha suspect Darrell Brooks Jr. Made Rap Songs Ranting Against Trump, White Supremacy, by Jordon Dixon-Hamilton, Breitbart, November 22, 2021].

Why then was Brooks not charged with a hate crime against whites? Leave aside that an equivalent act by a white man would be the biggest story in the country. This is a case where a man deeply animated by anti-white hatred, openly preached, acted on that hate and killed innocent white people. And the government seems content to let it slide. In fact, journalists think the real problem is that whites who are attacked have the temerity to notice what is happening to us [White supremacists exploit ’false narrative’ of racial motivation in Waukesha parade tragedy, by Isiah Holmes and Henry Redman, Wisconsin Examiner, September 14, 2022].

After the cities burned and people killed in the names of George Floyd, Michael Brown, Trayvon Martin, and so many others, spare us the maudlin wailing about ”weaponizing” crimes. It’s all that journalists do. What happened in Waukesha wasn’t a ”tragedy,” like a natural disaster or an unfortunate situation resulting from character flaws. It was the inevitable outgrowth of anti-white hatred deliberately cultivated by the leading institutions in this society. And 76 convictions are not enough. I still say that the victims, including all the white people of this country symbolically targeted by this crime, didn’t get justice.

We should demand hate crime charges against Brooks.