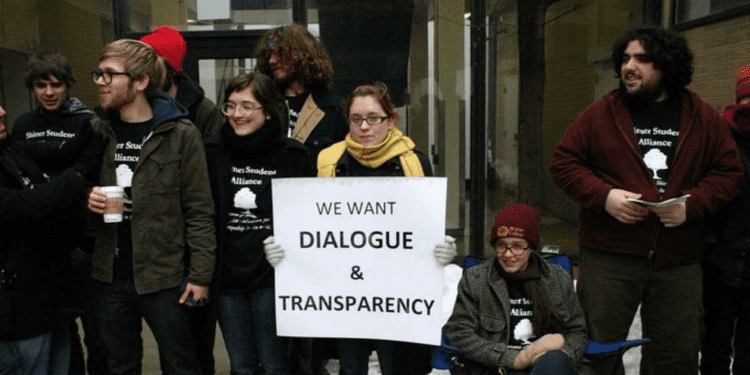 Why Liberal Arts Colleges Are Starting To Go Under

Here’s an informative Washington Post article on the ongoing collapse of Hampshire College in Amherst, MA, and what it means for less extreme leftist liberal arts colleges down the road. Hampshire was founded in 1970 to be a hippy college so it doesn’t have a big endowment or beautiful buildings like older liberal arts colleges often do. Also, I’m guessing that Tiger Moms are allergic to it. Then came the Great Awokening, which as usual increased unhappiness at Hampshire by encouraging the least mentally stable students to act out.

Only 13 new students showed up at Hampshire this fall.

I also just found out that Hampshire College, another haven of SJWs, is hanging on by a thread:

The article really explains how the economics of SJWism just don’t add up anymore for these 2nd and 3rd rate liberal arts colleges. OTOH, they depend on tuition to keep the doors open but OTOH they can’t fill their classes, especially with qualified students, unless they discount their prices below what state college would cost. Not too long ago, Hampshire was the kind of place where the average student was a lesbian with blue hair. But recently, it became the kind of place where the average student is a BLACK lesbian with blue hair.

The result is an economic and academic death spiral. It couldn’t happen to a nicer bunch of folks.

In Hampshire’s case, hilariously, the students condemned the place (which was already top 1% in SJWism) as a haven of racism and sexism and would approach kids on tours and tell them NOT to come for this reason. If you are a prospective freshman and a fat black lesbian with blue hair tells you this, it has a big impact. Either you take her at face value and don’t apply or else you think “this is the kind of place where unhappy fat black lesbians who make false accusations set the tone” and you don’t apply either. Thanks a lot guys.

The article points out that residential liberal arts colleges are pretty much a uniquely American thing. I guess this is one more nice thing (yes, believe it or not these places were nice once) that we aren’t going to be able to have any more in the new, diverse Woke America.

Here’s some informative paragraphs from the article by Eliza Gray about college tuition in general, not just Hampshire:

It’s worth a pause here to explain how college pricing works. Like airline passengers, every student at a given college pays a different price. Colleges list high tuition prices hoping that enough students pay the top price to compensate for those who can pay little or nothing. Depending on the state, needier students will usually pay less at a liberal arts college than they would at a state flagship. It sounds counterintuitive, but choosing a public school to save money is actually a privilege for the affluent. And since the 2008 recession, more well-to-do parents are choosing those schools. To compete, private colleges are then forced to offer merit aid to top students who don’t need the money. Admissions professionals call the tension between giving grants to entice affluent students and using the money to increase diversity with need-based aid the “iron triangle.” And the pressure is a factor for the whole sector: A survey of 405 private nonprofit four-year colleges by the National Association of College and University Business Officers found that though the average tuition rate was $38,301, the average amount that first-time freshmen paid was just $18,424.

Ironically, wealthier, more prestigious schools don’t have to give out as much merit aid because they’re more likely to get qualified affluent students willing to pay a premium: Four percent of Hampshire’s new students paid full price in 2017-2018, but at nearby Amherst College, U.S. News’s No. 2-ranked liberal arts college, 34 percent of new students paid the list price of $71,300, according to the National Center for Education Statistics. Enrollment experts say that difference has a lot to do with high rank. “As college prices exceed now easily $70,000 a year, parents are scratching their heads going, ‘I don’t think it’s going to be worth it unless my kid is going to go to a school that everyone is bragging about,’ ” says Bob Massa, a former enrollment manager at Johns Hopkins University and Dickinson College who teaches at the University of Southern California’s graduate school of education.

This puts even more pressure on schools just below the top. “In the U.S., income disparity is growing, and we have fewer and fewer Americans in the middle,” explains former Hampshire president Nelson. “What we have in higher education is exactly the same thing. Institutions with over a billion in endowment are getting stronger and stronger as they can attract the best students. … And financially under-resourced institutions are going to get weaker and weaker.”

There were a lot of births in the United States during the Bush Bubble, so the number of basic bodies turning 18 will be fairly high for the next half dozen years. But births in 2006-07 were concentrated in the Don’t Test Well demographics such as illegitimate Hispanics. Then the birthrate fell off a cliff in 2008-2009, so a lot of colleges will likely go out of business in 2026-2030. Or they will import zillions of Asians.