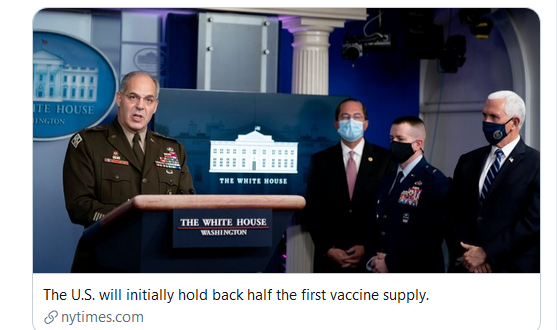 Why Is Half the Pfizer Vaccine to be Warehoused Unused for First 3 Weeks?

So the FDA panel voted 17 to 4 with one abstention to approve the Pfizer vaccine. But that still isn’t official FDA approval, which is expected to come “within days.” (Why not tonight? Does the FDA brass have something more important on their schedules?)

Here’s a question I have about the initial rollout plan. From the New York Times news section:

The U.S. will initially hold back half the first vaccine supply.

A top federal vaccine official said Wednesday that 2.9 million doses of Pfizer’s Covid-19 vaccine will be shipped around the country in the first week after it is authorized by the Food and Drug Administration — half of the initial shipment from Pfizer.

On a call with reporters, Gen. Gustave F. Perna, the chief operating officer for Operation Warp Speed, the federal effort to speed a vaccine to market, said that 2.9 million doses would be sent out once the vaccine is authorized, and 2.9 million saved for booster shots, which are given three weeks later. The remaining 500,000 of an available 6.4 million doses are to be held in reserve, in case they are unexpectedly needed.

Health care workers and nursing home residents will be the first groups to receive the vaccine.

General Perna said he had decided to set aside the doses earmarked for the second shot out of caution.

“Eventually, we will become much more confident in our manufacturing, our distribution process, state handling, et cetera,” he said. “And then the requirement for reserve won’t be necessary.”

With so many old people in danger of dying in January, as the Third Wave spreads from the Upper Midwest to the country in general, instead of the current plan of leaving half the existing doses in a warehouse for three weeks, why not focus instead on maximizing the number who get the first dose as soon as possible, even if their second dose might might be delayed by a week or two?

My reading of the data suggests the first dose alone has roughly zero efficacy during the first 10 days after injection, but by days 14-21 it’s up near 85-90% efficacy. The second dose, after 3 weeks, boosts efficacy only up to 95%. So, wouldn’t it make more sense to use the first 5.9 million doses to get 5.9 million people up to 85-90% efficacy rather than to get 2.95 million up to 95% efficacy?

Granted, there is fear that the a one dose regimen would wear off faster than a 2 dose regimen. So I’d be all in favor of using subsequent deliveries to get the already inoculated their second dose, but I would rely on just-in-time deliveries of newly manufactured doses for the second dose rather than warehouse the inventory needed for second doses.