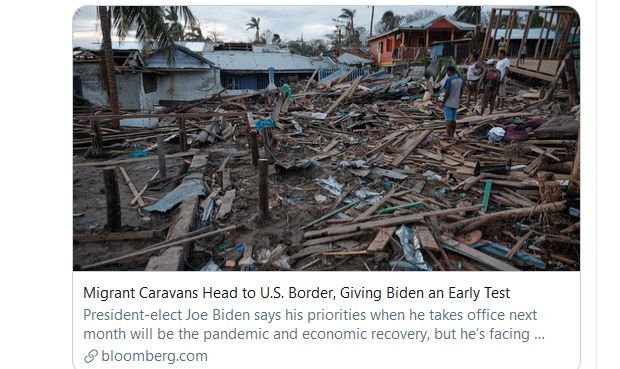 Central Americans Think Trump On The Way Out, New "Caravans" Forming in Honduras

Down in Central America, they think Trump is on his way out, and they are forming "caravans" again.

“There are going to be caravans, and in the coming weeks it will increase. People are no longer scared of the coronavirus. They’re going hungry, they’ve lost everything and some towns are still flooded.” [Migrant Caravans Head to U.S. Border in Early Test for Biden, by Michael D. McDonald and Eric Martin, Bloomberg, December 9, 2020]

As for the coronavirus, we are #1 in COVID-19 cases and deaths, and don't need any more.

“When there is a change in government in the U.S. or Mexico, caravans start to move because they are testing the waters to see how authorities respond. What they see is that the one who said he was going to build a wall and hated Latinos is on his way out.”

That's how they see it.

Hundreds of Honduran nationals have formed a caravan heading toward the United States, following a pair of natural disasters that tore through the region. The caravan was organized on social media following two major hurricanes that hit the Central American country last month, just two weeks apart, with groups announcing on platforms when and where they would begin their travels from. As of Thursday [December 10, 2020], there are currently two caravans in the works, according to Bloomberg, one scheduled to leave in the coming days and one in mid-January. [New migrant caravan en route to US from Honduras , by Emily Post, December 10, 2020].

Trump was able to greatly reduce immigration from Central America by putting pressure on Mexico to control its own border with Guatemala. Obviously, these Central Americans think the Trump Era is nearing its end.

The exodus of Hondurans from their home country could serve as President-elect Biden’s first major challenge.

"President-elect" as declared by the media.

The 46th commander-in-chief has pledged to reverse President Trump’s hard-line immigration policies, but has not explained how he plans to handle the tens of thousands of migrants that Mexico has kept at bay at their own southern border under Trump.

According to a senior Mexican official, speaking on condition of anonymity to the Washington Post last week, there are concerns among those in the government that any moves by Biden to undo some of Trump’s security measures could cause their southern border with Guatemala and Belize to become overwhelmed.

“Our southern border was a mess, and it’s under control now,” the official said.....

Now that's interesting. This Mexican official points out that it's not in Mexico's interests to have Central Americans stampeding across Mexico's borders at will.

This anonymous Mexican official says that  "Central America needed financial assistance to prevent a mass exodus of its people. “They can’t wait for private investment to arrive.”

Maybe, if it's done properly, but the Central Americans can't be sending waves of immigrants AND be receiving big bucks from the United States.

The article quotes another Mexican official:

“We still need migration to be orderly. We can’t just have an endless stream of unidentified people transiting through the country with no authorization,” another senior Mexican official told the paper.

Amen to that, which goes for any self-respecting country.

Guatemala, which sits between Honduras and Mexico, is now sounding the alarm over the impending potential crisis, with President Alejandro Giammattei warning that without help from wealthier nations, his citizens would flee to other nations as Hondurans invaded their borders.

“If we don’t want hoards [sic, should be hordes] of Central Americans looking to move to other countries with better living conditions, we have to make a wall of prosperity in Central America,” he said at an event in Honduras last month.

So what does the Biden Camp have to say?

Reached for comment by Bloomberg, a Biden transition spokesman said, “President-elect Joe Biden will restore order, dignity and fairness to our immigration system. At its core, his immigration policy will be driven by the need to keep families together and end the disastrous policy of family separation.”

A spokesperson for Biden did not respond to The Post’s request for comment.