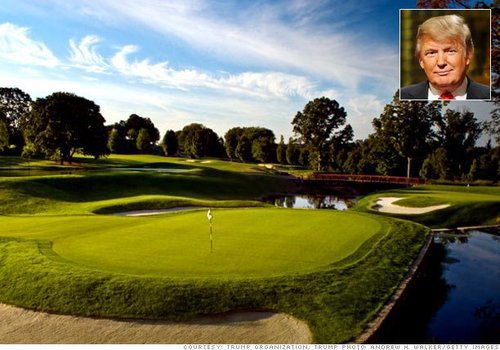 With the whole world rushing to issue press releases announcing they have cut all ties with Donald Trump for mentioning the I-word, I’m struck by the dog that hasn’t barked: Bill Clinton, who has long been said to be a member of the Trump National Golf Club – Westchester. Bill doesn’t appear to be in any hurry to inconvenience himself, especially not if it might mean having to reschedule some tee times at the peak of the busy summer golf season. From a 2011 article in Westchester Magazine:

The next time you tee it up at one of Westchester’s country clubs, don’t be surprised if you spot a celebrity or two on the course with you. Just remember to wait until after they sink that knee-knocker putt to ask for an autograph. 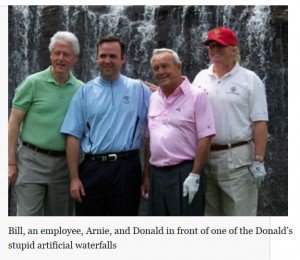 The famous (and infamous) practically have their own wing in the locker room at Trump National Golf Club in Briarcliff. Chief among them is former Commander in Chief Bill Clinton, aka the president of the United States (his handicap is a state secret, as are his tee times).

The Donald himself not only belongs to the club but owns it, of course, and carries a 3.7 handicap index — for real!

Trump has also been generous with the Clinton Foundation, donating at least $100,000, according to the non-profit.

“He [Trump] has been, believe it or not, uncommonly nice to Hillary and me,” Clinton replied. “He thought Hillary was a good senator for New York after 9/11 and he has actually, he’s one of the many Republicans who supported our foundation before they got the memo.”

“You know, Donald Trump has been uncommonly nice to Hillary and me. We’re all New Yorkers. And I like him. And I love playing golf with him.”

Perhaps somebody should ask Candidate Clinton if it’s true her husband is still a member of a Trump National country club?