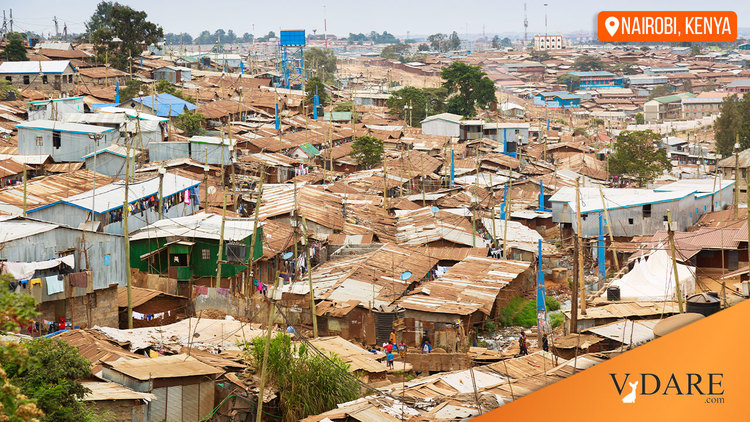 It has been suggested, not implausibly, that Africa’s vast population growth (the UN forecasts that sub-Saharan Africa will grow from a half billion in 1990 to 3.7 billion in 2100) is a problem that will take care of itself as more Africans move to the big cities, which normally depresses fertility.

From PRB (which I’m guessing used to mean Population Reference Bureau, but that sounds racist these days)

Over the past few decades, demographers have spotted “stalls” in some countries—periods when the gradual decline in births has stopped, leveled off, or started to reverse. Of the 37 countries studied, 23 experienced stalls in fertility decline in the capital or largest city.

We often think of cities as being in the forefront of social change, including the shift toward smaller families, which has occurred across the globe in the last half-century. In sub-Saharan Africa, even though women have more children than women in other regions—nearly five, on average, in their lifetimes—those living in cities have fewer than those living in rural areas, following the global pattern. Urban women have higher levels of education, are more likely to work in the formal economy, and report wanting fewer children than rural women.

… Demographers generally expect these trends to continue in sub-Saharan Africa, as they have in parts of Latin America, the Caribbean, and Asia, where women have about two children on average.

Fertility decline in sub-Saharan Africa is a complicated story, however. Over the past few decades, demographers have spotted “stalls” in some countries—periods when the gradual decline in births has stopped, leveled off, or started to reverse. Reasons for the stalls vary, and it is not clear whether they are temporary or long-term.

Bruno Schoumaker of the Center for Demographic Research at the University of Louvain, who spoke at PRB in April, has conducted studies that shed new light on the stalling phenomenon. Most recently, he and colleague David Antonio Sánchez-Páez used birth-history data from 198 surveys in 37 sub-Saharan African countries to look at fertility trends in capital cities, other urban areas, and rural areas to see where stalls had occurred. They then examined the degree to which urban fertility and urbanization contributed to changes in national fertility since 2005.

Of the 37 countries studied, 23 experienced stalls in fertility decline in the capital or largest city. Stalls occurred in diverse cities at varying levels of fertility: in Niamey [the capital of Niger, a Muslim country in the Sahel that has the world’s highest fertility rate], where women have an average of about five children; Harare (between four and five); Lagos (just under four); and Accra and Nairobi (about three). In some countries, stalls in fertility decline in urban areas contributed to country-wide fertility stalls.

There are notable exceptions: In Addis Ababa, Ethiopia, for example, women now have around two children on average.

Evelyn Waugh’s two novels set in Ethiopia, Black Mischief and Scoop, contribute to the picture of Ethiopia as a typical sub-Saharan country. On the other hand, Ethiopia, which has been, at the elite level, literate for 2500 years and Christian for 1700 years, strikes me as, in some ways, the southernmost outpost of the Middle East due to its high altitude increasing its effective latitude.

But on the whole, the stalls in cities, combined with slowing urbanization, mean that cities now play a shrinking role in fertility decline overall. “They are no longer the drivers of fertility change in sub-Saharan Africa,” according to Schoumaker. Instead, rural areas are increasingly driving fertility decline on the subcontinent.

Why would the shift to smaller families slow or stop in sub-Saharan African cities, where fertility remains so much higher than in other parts of the world? One explanation could be that recent migrants to cities have higher fertility than non-migrants; however, according to Schoumaker, this does not appear to be the case. Rather, his work shows that three other factors account for these stalls: a slow increase in contraceptive use, persistently high demand for children, and shorter duration of post-partum infecundability (related to the fertility-inhibiting effects of sexual abstinence and breastfeeding after a birth).

Perhaps new mothers are better fed and more vibrant, so the old ways of slowing the next pregnancy are less effective?

For those who work in reproductive health, these findings offer multiple takeaways. One is that if the ideal family size in cities remains high and women are having the number of children they want, then the scope for expanding access to contraception or better-quality services to reduce unwanted pregnancies there is limited. Researchers should look instead at the factors influencing ideal family size in sub-Saharan African cities.