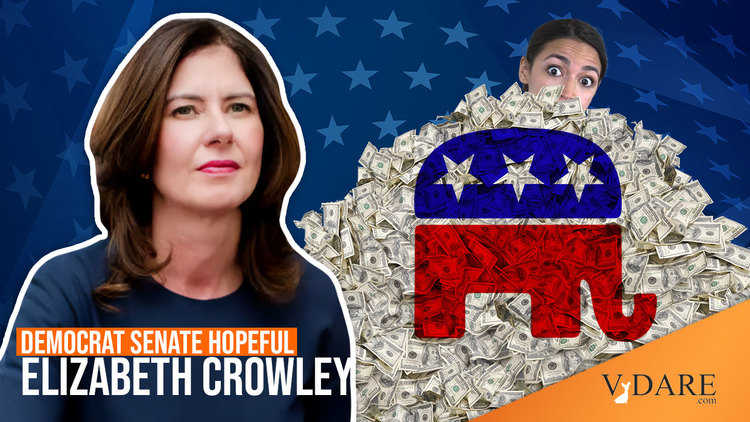 Why Are Republicans Helping So-Called "Centrists" Retain Control Of The Democratic Party—Instead Of Letting Them Go Full AOC?

Earlier (2018): Loser Joe Crowley: “I Can’t Help That I Was Born White” and A Reader Writes On Congressman Joe Crowley, A “White Guy“ Who Lost His Job To A Minority

I was excited when I saw the news about Democrats donating money to “far right“ Republicans in primaries in an effort to alienate “centrist“ voters in the general election.

The Democratic Governors Association spent more than $1 million to broadcast an ad listing Cox’s far-right credentials that, though it had the tone of an attack ad, was designed to make him more appealing to the GOP’s conservative base ahead of the primary. Similar tactics were used to help pro-Trump candidates win gubernatorial primaries in Pennsylvania and Illinois. Democrats also boosted several far-right GOP candidates pursuing seats in the Senate and House of Representatives, though most lost their primary bids.

The reason Democrats are pursuing this strategy, despite their view that Trump and his allies represent an existential threat to American democracy, is the belief that MAGA candidates will be easier to defeat in the midterms than more mainstream Republicans.

I was hoping that Republicans would do something similar but it looks like they‘re actually doing the opposite. In New York City, there‘s a potential for another AOC-type upset victory in a race for the New York state senate where a white “centrist“ Democrat is running against a Hispanic self-admitted socialist.

Now, the Crowley clan has a chance to get revenge.

Former City Councilmember Elizabeth Crowley, Joe’s cousin, is running for State Senate, and one of her primary opponents is Kristin Gonzalez, a Democratic Socialist backed by Ocasio-Cortez.

So who do you think the Republicans are helping here?

Campaign finance records show an ideologically heterodox coalition lining up to support Crowley, who has a big fundraising lead in the race, including at least $80,000 from registered Republicans, lobbyists, and people in the real estate industry.

Democrat Elizabeth Crowley has collected at least $80,000 for her primary race from registered Republicans, lobbyists, and people in the real estate industry.https://t.co/boxXa3idWS

It‘s pretty obvious Republicans know they have zero chance of winning an election in New York City so they‘re instead trying to elect Democrats who are not open socialists, but this is disappointing to me because I was hoping the GOP would employ the Democrats‘ accelerationist strategy, which would be even more effective, as openly socialist minorities will push white voters to vote for Republicans at even higher rates.

The Democrats are obviously hoping to run white candidates who eschew Far Left Twitter rhetoric so they don‘t continue hemorrhaging white voters, but the Democrats can only delay the demographic inevitabilitly of their candidates reflecting the racial and political realities of their base voters for so long. Eventually candidates like Kristin Gonzalez will be the norm, and so-called centrists like Crowley won‘t stand a chance in a Democrat primary.