One idyllic evening on our vacation to the Southwest, it felt like we had stepped back in time: it was a pleasant August evening—sunny, but not hot—and we were among perhaps three dozen people gathered on the lawn of a tiny house in a tiny town many miles from a highway.

The town had only two restaurants, two little general stores, and a handful of houses. There was no fast food, no supermarkets—nothing to indicate it wasn't decades ago except for the modern cars and trucks.

The entertainment was a guitar player singing songs Americans used to know—such as about John Henry, the steel drivin’ man who died beating a new steam-powered drill. I doubt if many of today's school children are familiar with such songs—and certainly not the many foreign-born children in the area where I live.

But I failed to mention the most unusual thing: everyone was Caucasian—except my Chinese wife who regards herself as an American. We were at a celebration of the 100th anniversary of the National Park System—the tiny house was the local headquarters.

The Superintendent seemed to be a nice man who truly loved the land entrusted to his care. But in his hand was a thick book—obviously the product of busy bureaucrats—which outlined the future plans. Accordingly, three times he mentioned the need for diversity—that something needed to be done to bring Hispanics to the park.

Why? My wife said to me, “Obviously they are not interested.” So why must me recruit them? We read that our parks are being “loved to death” while the Park System advertises to bring in thousands of foreign visitors—not to mention all the foreign workers doing jobs American teenagers could do. So why try to bring in people who, left alone, choose not to come?[ Yellowstone and beyond: Are the national parks being loved to death? , By Todd Wilkinson, CSM July 24, 2016] 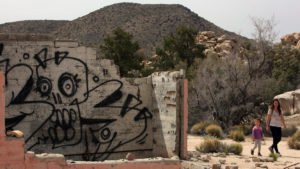 Perhaps the bureaucrats feel the park isn't vibrant? Once poverty condemned me to live in a Hispanic neighborhood. I know about vibrancy: looking out my window I could check out the latest colorful gang graffiti on the walls. And then there was the fun crime: four or five times I returned from work to find my place had been burgled.

However in reality, Hispanics are utilizing our parks:

And the same thing is happening in other parks and National Forests.

I thought the reason for parks was to enjoy nature—peacefully—and preserve it for future generations. It is still possible in carefully chosen out-of-the-way parks. But as the elites swell our population, elect a new people, and enforce diversity, how long will it be true?