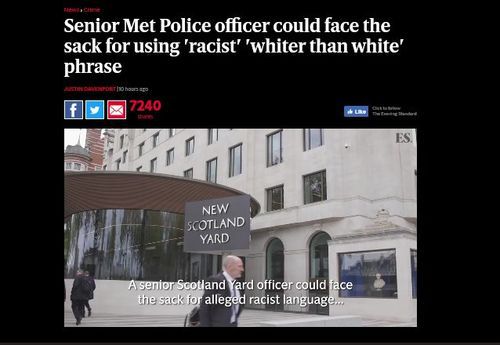 From the UK Evening Standard:

A senior Scotland Yard officer could face the sack for alleged racist language after using the phrase “whiter than white” in a briefing to colleagues.

He could face an internal investigation for gross misconduct — the most serious disciplinary offence. Sources said the detective superintendent addressed colleagues about the need to be faultless and above reproach in carrying out inquiries, saying that they needed to be “whiter than white”.

From searching around for awhile, it appears “whiter than white” is a phrase associated in the UK with Persil laundry detergent, kind of like “stronger than dirt” is associated with Ajax cleanser in America.

The Met later received a complaint about his comment and passed it to the police watchdog for investigation.

The officer has now been placed on restricted duties while the Independent Office for Police Conduct investigates. He has been told the inquiry may take up to 12 months to complete.

A highly respected officer, he strenuously denies any wrongdoing and is co-operating fully with the investigation. He is attached to the Met’s anti-corruption squad, the Directorate of Professional Standards, a policing branch portrayed in the BBC drama Line Of Duty.

Insiders said the internal investigation shows the extent to which the police misconduct process has got out of hand.

One said: “There was no bad intent in this comment, it may have been a poor use of language but this is not what the misconduct process is for. This is not corruption, this is not serious wrongdoing. There should be informal ways of dealing with this, particularly at a time when we are so short of experienced officers.”

A spokesman for the Plain English Campaign said: “As the phrase means ‘morally beyond reproach’ and is used in that context with that intent, it seems fairly ludicrous that the officer in question is being investigated at all, let alone for ‘gross misconduct’. ”

Met chief Cressida Dick has not commented on the details of the allegations against officers ..

But I had to get the name Cressida Dick into this post somehow.

Shakespeare is next up for inquiry:

Who sees his true-love in her naked bed,
Teaching the sheets a whiter hue than white,