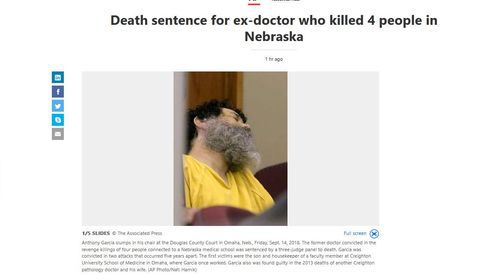 The sentencing of former doctor Anthony Garcia for killing four people, one of them an 11-year-old boy, in Nebraska has caused some of our correspondents to ask if this was a case of what we call an "Immigrant Mass Murder". Apparently not.

Dr. Garcia is apparently a Chicano i.e. a Mexican-American who grew up in a suburb of Los Angeles, father a postal worker, mother a nurse. I don't believe either of his parents were immigrants, either. [Death sentence for ex-doctor who killed 4 people in Nebraska, AP, September 14, 2018]

MurderPedia.com has a summary of the case which shows that Garcia killed four people because he was fired a from Nebraska medical center because of his horrible attitude.

We have a separate category we call the "Disgruntled Minority Massacre" killing, which is where a usually black, but sometimes Hispanic worker will be fired from a job, and then come back and kill his employer and/or several co-workers. That's because the firing was "racist"—in the twisted mind of the killer.

The unusual facts here are that the killings started years after the firing, and targeted the firer's family.

Believe it or not, this is not the first case like this involving a minority doctor.