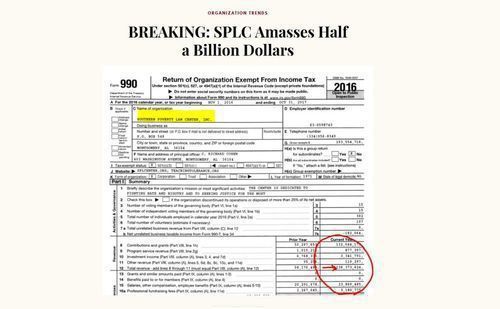 The Southern Poverty Law Center, A Fundraising Organization, Raised A Lot Of Funds During The First Year Of Trump Derangement Syndrome

The SPLC’s 2016 fiscal year started November 1, 2016 and ended October 31, 2017 and it was a doozy. Gifts, grants, contributions, and membership fees jumped from a healthy $50 million in the year leading up to Trump’s election to almost $133 million in the 12 months of the Trump Era.

As usual, Morris Dees’ minions can’t figure out what to spend all their lucre on, so it mostly piles up in the SPLCs increasingly swollen endowment, which grew 37% in one year from $328 million to almost $450 million:

I don’t exactly know why the SPLC piles up such a vast endowment rather than spending it down. Presumably, there aren’t many well-heeled Klansmen left to fight (if there ever were many). Mostly, I suspect Morris just likes raising money. It’s what he does.