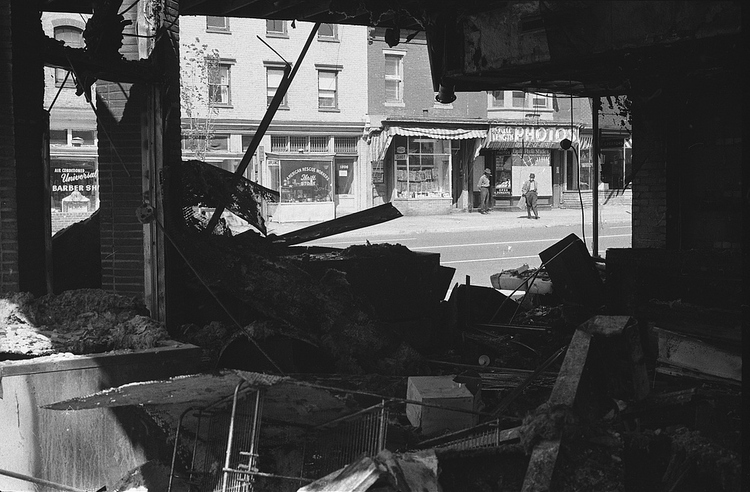 Above, the result  of the Martin Luther King riots of 1968 in the District of Columbia.

Steve Sailer's post about the problems of tourists going to see the "government yard in Trenchtown" that Bob Marley sang about in "No Woman, No Cry" reminded me that both Norman Podhoretz and Florence King had found it necessary to tell historically minded inquirers that a visit to the scenes of their youth would be almost certain death. The problem for Marleyphile tourists is that Trenchtown is what the BBC describes as a "Jamaican ghetto" and a "gritty, violence-wracked district of Kingston."

The problem with Norman Podhoretz and Florence King is that Podhoretz grew up in the Brownsville district of Brooklyn, and Miss King in Washington, DC.

Perhaps as good a place as any to begin is with a phone call I received some years ago from a woman doing publicity for the Brooklyn division of the New York Public Library system. From her broad midwestern accent alone, I could tell that she came from neither Brooklyn nor anywhere else in New York, but even without that detail, the question she asked me would have proved definitively that she knew next to nothing about the city.

The question was this: As one of a number of "prominent people" born and bred in Brooklyn, would I be willing to have my picture included in a brochure celebrating an upcoming anniversary of the library? I would be honored, I said; just send the photographer up to my office. "Oh no," she answered, "we want to take your picture in front of the local branch you used as a kid."

I had to pause before replying with a laugh that I had no objection to this arrangement provided they could send me in a tank, or at least with a police escort. And they had better do the same for the photographer. Even if the branch from which I had regularly borrowed books many years earlier was still standing-which I doubted-the neighborhood surrounding it had become a war zone, and any middle-class white who ventured into it would be lucky ever to get out in one piece, if at all.

It was clear from her hemming and hawing that she was trying to decide whether to take this as a piece of especially extravagant hyperbole or a shameless display of racism; and since I never heard from her again, I concluded that she had opted for the latter. Yet I was exaggerating only slightly about the danger of setting foot in the 1970s or '80s into the Brownsville section of Brooklyn, where I had spent the first twenty years of my life (1930-50), during most of which Fiorello H. LaGuardia was the mayor of New York.

Florence King, writing in The Florence King Reader, (Everybody's Gotta Right To Be Famous, p. 292) about two extremely annoying female fans (stalkers, more or less) who had been pestering her with letters, and had written that they planned to make a pilgrimage to her childhood home...in a 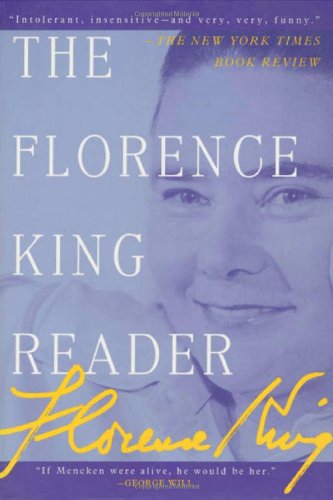 formerly white neighborhood in the District of Columbia:

Living through an extended period of mental tension affects different people in different ways. With me, release takes the form of giddy, cackling mischief. It occurred to me that if The Two carried out their plan to make a pilgrimage to my old D.C. neighborhood, my problem would be most efficaciously solved. I grew up in the section that was burned down during the Martin Luther King riots. The 14th Street of my childhood with its segregated dimestore lunch counters is now known as the Combat Zone; the Park Road of my birth is now lined with crack houses; and Meridian Hill Park, where Mama took me in my stroller, has been renamed for Malcolm X.

All I had to do was wait, and the Brothers would rescue me from my dilemma. Moreover, it would be the book-promotion coup of the century, the stuff that Jacqueline Susann's dreams were made of, something not even Irving Mansfield would dare try to arrange: two bodies found at 14th and Park Road with autographed copies of Confessions of a Failed Southern Lady clutched in their lifeless hands.
It was all but guaranteed that two lone white women roaming around such a neighborhood would get into serious trouble. When I thought more about it my mischief receded. Since they obviously knew nothing about Washington I felt it was my responsibility to warn them, but I couldn't do it without getting myself in deeper. They would interpret my warning as loving concern and be encouraged. For my own sake, I would have to stand by and do nothing while they walked into a trap.

In fact, she "detonated into a towering rage" and wrote them "what is known in certain quarters of the publishing world as 'one of Florence's letters."

This cured them of writing her letters, (it would have cured me, too,) and may have saved their lives. But it's important to remember such stories, when you hear multiculturalists like Jane Elliott say white flight is caused by racism. Maybe it is, but not white racism.