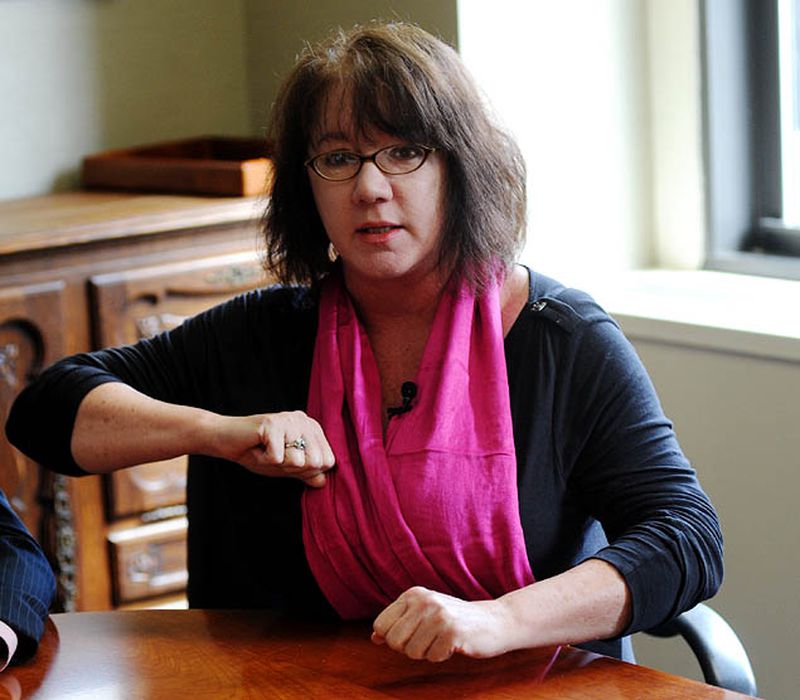 This is the white teacher, a native of Mississippi, who was sexually harassed for years at a New York high school:

"A high school teacher who said she was sexually tormented by her students and then punished for complaining has scored a $450,000 settlement from the city.

Theresa Reel, 52, who quit her job when she signed the deal, said the knowledge that she never has to set foot in the High School for Legal Studies again is just as sweet. “I wasted six years of my life being treated like dirt — less than dirt,” Reel told the Daily News on Thursday. “I can’t put into words how happy I am.”[Harassed teacher Theresa Reel gets $450G By Mark Morales, Ben Chapman And Tracy Connor,NY Daily News, September 21, 2012]

This is the black female principal who didn't care:

From the Daily News story:

When she told then-Principal Denise Morgan that she made a student leave the class for sexual comments, the official’s response was: “And how does that threaten you?”

“I am very comfortable with the professional manner in which I responded to this teacher’s concerns,” she told The News.

This is the Hispanic principal who also didn't care:

And a 2008 letter from the Department of Education chastised the social studies educator for “inappropriate attire,” described as a “low-cut, V-neck lace top.”

“It made me feel like I was worthless, like my own supervisors believed that I deserved to be treated like this,” Reel said at the Woodside, Queens, home she shares with her cat."

This is the sexual harassment:

One boy allegedly told her: “I’ve got rubbers — want to party?” Another student accused a classmate of performing a sex act on Reel for good grades, she said.

She recalled one male student crossing a hallway so he could graze her breast with his elbow and then “smirk” at her.

“I was screaming,” Reel said.

And these are the students at the "School for Legal Studies"—62 percent black,  35 percent Hispanic, 2 percent white.

The odd chart colors are sort of explained here.

So a white teacher, from Mississippi, is sexually harassed for years, by black and Hispanic boys, 14-18, while a black female principal, and a Hispanic female are blaming the victim.

And the result was that  the city's lawyers tried to get the suit tossed out"arguing Reel did not prove the school was a hostile environment, that she was singled out for her gender...."