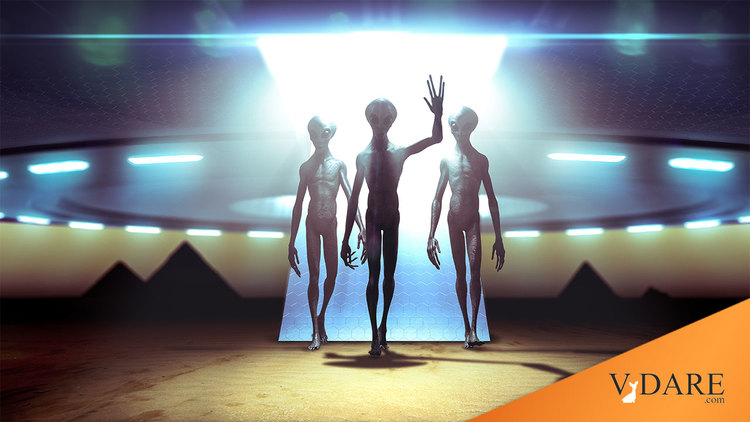 What Do You Think About the UFO Sightings?

Back in 2017, Harry Reid, the long-time top Democratic senator, mentioned that he and two other aged solons, Daniel Inouye and Ted Stevens, had slipped $22 million into the black budget in the first decade of the century to follow up on weird UFO sightings by military pilots. I didn’t take it terribly seriously but wrote up what I’d thought about UFOs before 2017 for Taki’s Magazine, which might still be of some interest.

UFO rumors didn’t go away through the Trump years and now the Biden Administration says a public report is coming soon, and is dropping hints that they are taking the question seriously. Both Trump and Obama are saying that the UFO sightings by military pilots and accompanying video are interesting. Military aviators apparently have been given the signal that it now wouldn’t hurt their careers to talk about what they’ve seen, so we are now seeing headlines like this one in The Independent.

Greg Cochran says he’ll be writing up a long West Hunter blog post on how to think about the possibilities of highly different levels of technology.

I will mention that he pointed out the long history of how pilot sightings of “sprites,” bright colored upper-atmospheric lightning or Transient Luminous Events far above the clouds of conventional lightning storms, weren’t taken seriously for over 60 years until they were finally captured on video by the Space Shuttle in 1989.

Scottish Nobel laureate C.T.R. Wilson explained how they’d work in the 1920s and they were sighted frequently by pilots during WWII. But because they were so fast that they were easier to see with the eye than record with a film or video camera, pilot reports of the existence of sprites weren’t taken seriously by the scientific establishment for over 60 years even though a Nobelist had correctly predicted their existence in the 1920s. Pilots eventually tired of mentioning what they’d seen because it seemed more likely they’d lose their licenses than get anybody to take them seriously.

Now this wasn’t a vast conspiracy to cover up sprites for some nefarious deep-state reason, nor did authorities have ideological reasons for pooh-poohing sightings. That was just what all the other higher-ups did, so they did it too. And then everybody else stopped Sprite Denialism in the early 1990s so they stopped too.

The history of science features other examples of Emperor’s New Clothes-style consensuses without particularly conspiratorial motivations. For example, we often hear the tragic tale of Ignaz Semmelweis, the edgy Hungarian doctor who discovered that physicians should wash their hands, but no doctor would listen to him and he went insane. This case is often dissected to extract the precise reasons for this toxically dysfunctional interaction between the eccentric Semmelweis and the resentful medical profession.

But few remember that about the same era, the most fashionable doctor in America, Oliver Wendell Holmes Sr. (the father of the famous Supreme Court justice), who was in his spare time perhaps American’s most critically admired humorist between Ben Franklin and Mark Twain, also tried to get doctors to wash their hands. Unlike with Semmelweis, everybody went right on thinking that OWH Sr. was the world’s greatest guy. But nobody did what Holmes asked either.

Anyway, I’m getting off the topic of UFOs, so what do you think is going on? Aliens? Hoax? Chinese? Russians? Not yet recognized natural phenomenon like sprites? Disinformation? Randomness? Hackers? Or what else?

I haven’t heard much from civilian airliner pilots about these recent UFO sightings. What do they say?

And are the military pilots consistently describing a change in this phenomenon over the decades, like, “I didn’t see this stuff before 2011–2012”? Or has this always been around back into the 20th century?

It could be that military pilots always see this kind of stuff, but the military has upgraded their sensors (for example, on spy satellites) and recently began to confirm visual reports, the way that video cameras in 1989 could finally confirm human sightings of Transient Luminous Events going back generations.

From a motivational standpoint, I kind of like the hacker idea: maybe someday is doing something to fool the world not for any carefully calculated pragmatic reason but because it would be a blast to do so.

By the way, here’s a fun article in the NYT:

The Mystery of Magic’s Greatest Card Trick
At 94, the magician David Berglas says his renowned effect can’t be taught. Is he telling the truth?

LONDON — In the late 1940s, the British magician David Berglas started refining a trick that came to be known as “the holy grail of card magic.” To this day, nobody is certain how he did it.

Decades into his retirement, he has revealed just about every secret in his long and storied career. …

The trick is a version of a classic plot of magic, called Any Card at Any Number. These tricks are called ACAAN in the business.

The cards are dealt face up, one by one. The 31st card revealed is, of course, the nine of clubs. Cue the gasps. …

For all their differences, every ACAAN has one feature in common: At some point, the magician touches the cards. The touch might be imperceptible, it might appear entirely innocent. But the cards are always touched.

With one exception: David Berglas’s ACAAN. He would place the cards on a table and he didn’t handle them again until after the revelation and during the applause. There was no sleight of hand, no hint of shenanigans. It was both effortless and boggling.

Among magicians around the world, his touchless ACAAN is one of the most talked-about and puzzled-over tricks in history. It was eventually labeled “The Berglas Effect,” and helped make its creator’s reputation in a career that spanned six decades.

The article recounts how Berglas denies planting a stooge in the audience. The author visits the nonagenarian at home, where the retired magician asks him his favorite card and number, then suddenly berates him for coming to his house and demanding that he perform his famous trick one more time.

A few minutes later, for reasons that I can’t explain, he softened.

“There’s a drawer behind you,” he said. “There are some cards in there which I haven’t touched in a long time.”

I turned and opened the drawer. Inside I saw three decks in their cardboard boxes. Time began to slow down. I placed the decks in the middle of the table. He didn’t touch them.

“Choose one of these,” he said.

“Open it and place it facedown in front of you,” he said. “What was the card and number you mentioned?”

I dealt the cards myself, one at a time, face up.

It was the seven of diamonds. I stared at it, both gobsmacked and baffled. Gobsmacked because it seemed wildly improbable that he’d come so close. Baffled because it wasn’t spot on.

He didn’t try to sell 43 as a triumph. On the contrary, he said that in lectures to magicians he has always told his audience that one off isn’t close enough.

In the NYT’s comments, various people come up with plausible suggestions, such as that Berglas has 52 decks secreted around the room in groups of three, each deck sequenced in a different order. For example, the drawer to which he directs the interviewer might contain three decks in which the seven of diamonds might be the 43rd, 44th, or 45th cards. So, allowing the mark to choose one, at worst he could be off by two.

Berglas, a master psychological manipulator, then reacts to missing by just one with a shrug: not bad for a 94-year-old, but also depressing that his powers of magic are fading with age.

But, anyway, that doesn’t explain the UFOs. So, what’s your theory?