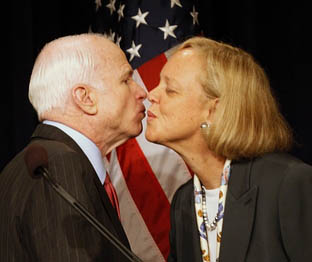 It didn’t take long for the blond billionaire to flip-flop. In California’s gubernatorial primary, Meg Whitman (pictured with Sen. McCain) moved toward immigration enforcement because she had a pro-borders opponent in Steve Poizner, and pledged to be ”tough as nails.”

The immigration policy page on her campaign website promises that a Gov. Whitman would eliminate sanctuary cities, pursue workplace enforcement, prohibit the dispensing of drivers licenses to illegal aliens, defend English immersion in schools and recoup prison costs from the feds, among other things.

But now that the general election beckons, Whitman thinks she can checkbook her way into hispanic support. She has already spent over $71 million of her own money just to win the primary, and is now making Spanish media more wealthy, including very expensive ads running during the World Cup soccer tournament.

One of the ads highlights Whitman’s opposition to a controversial Arizona law that compels police to check the immigration status of those stopped on suspicion of a crime. It also says Whitman opposed Proposition 187, the 1994 California ballot measure that would have denied taxpayer-funded services to illegal immigrants. The other focuses on jobs and the economy.

When asked by reporters, Whitman has consistently expressed her opposition to Proposition 187 and to the Arizona law, which became an issue during the closing weeks of the primary.

But she did not broadcast those stances in tens of millions of dollars in ads in her primary battle against Steve Poizner, who made illegal immigration a central issue. Instead, Whitman’s ads emphasized that she would be ”tough as nails” on illegal immigrants, and condemned amnesty, sanctuary cities and some taxpayer benefits.

”Illegal immigrants are just that, illegal,” she said in an ad that featured her campaign chairman, former Gov. Pete Wilson.

Wilson is viewed as a pariah by many in the Latino community because he was the most visible supporter of Proposition 187. In a recent Los Angeles Times- USC poll, only 16% of Latinos felt favorably toward him.

Strategists say Whitman, a billionaire who has put $91 million of her personal wealth into her campaign, must secure substantial support among Latinos if she hopes to prevail over Democrat Jerry Brown in November.

”Unless she gets over one-third of the Latino vote, I don’t care how much she spends, she’s not going to win,” said Allan Hoffenblum, a former Republican consultant who publishes the California Target Book. ”She was pushed further to the right on that issue than she wanted to go, but the one key thing she remained steadfast on, even though she whispered it during the primary, was that she opposed the Arizona law.”

Whitman would do better to forget about hispandering and support law and borders without apology. Opposing Arizona on immigration enforcement is not a vote-getter among the majority population, who continue to support the state according to every mainstream poll.

Below, a Whitman ad in the language of the invader – for ”una nueva California”!