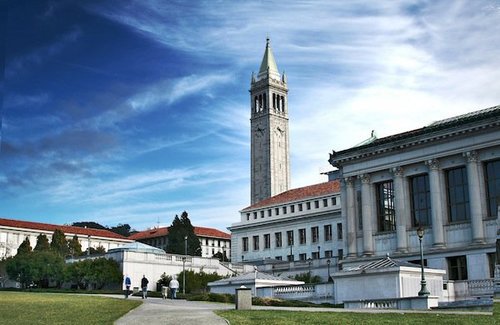 Pictured is the Berkeley campus, which currently has the highest number of foreign and out-of-state students in the UC system.

It’s already mid-August (boo!) and colleges are looking ahead to the new school year with its incoming freshman class. At the University of California system, the entering students will be more diverse, increasingly foreign and less Californian. The liberal suits like to pretend that it’s all about the world community joining hands in campus kumbaya, but the real reason is the full tuition checks required of the auslanders.

This trend is not new, as cash-strapped universities notice the financial resources that well-heeled foreign students offer. In fact, it was reported earlier this year that “international” students (the preferred term) are at an all-time high in American universities.

In addition, racial diversity gets special attention in today’s University of California. In the 2015 admission numbers, Asians account for 36 percent, hispanics 30 percent, whites 25 percent and blacks 4 percent. Does anyone think that all those hispanic students will graduate? It’s doubtful. A 2010 study found that less than half of Hispanic students admitted to college manage to graduate with a four-year degree.

The university overlords complain that they need more money from the taxpayers to admit more in-state kids, but nobody in the perfunctory news reports ever suggests that a lot of money could be saved by cutting waste in the enormous bureaucracy. One place the suits could cut is the funding for “diversity:” In 2011 it was reported that UC Berkeley had an office of diversity and inclusion that spent $17 million annually. UCB is plenty diverse and doesn’t need a big bureaucracy when the state’s demography already supplies it.

And here’s a money-saving idea: charge more for useless degrees like Chicano Studies. The decision of what major to choose should make the kiddies consider the real world of work after graduation. And promoting anti-American subjects like leftist Chicano propaganda shouldn’t be supported by California taxpayers anyway.

Also, keep in mind that the foreign students are well situated to grab an American job upon graduation, so it’s a two-fer screw job on young citizens.

As state funding for the University of California system has declined, campuses have plugged budget shortfalls by enrolling out-of-state and foreign students who pay more in tuition.

An analysis of enrollment and funding data shows a demographic sea change across the UC system.

About 95 percent of undergraduates enrolled in the system were California residents in 2007. That number dropped to under 87 percent in the 2014-15 academic year, as the state Legislature cut more than $810 million in funding, after adjusting for inflation. Meanwhile, international enrollment increased nearly fivefold over the same period, from 1.8 percent to 8.5 percent of the student body. The number of domestic out-of-state students grew by just under two percentage points.

As freshmen prepare to leave home and move onto campus for the 2015-16 academic year, an even higher percentage will be coming from overseas and across state lines. Non-resident admissions for the fall semester increased by about 13 percent UC-wide, with Santa Cruz, San Diego, Irvine and Davis experiencing particularly large jumps.

“I’ve already met so many international students and students from out of state,” said Mary Cozy, 18, an incoming freshman at UC Berkeley, which has the highest number of foreign and out-of-state students. “It’s nice coming together and being around people from all scopes.”

University officials say the influx of non-Californians into the state’s premier public universities makes campuses more diverse and gives students unique learning experiences that can’t be replicated in a class or textbook. It is also a cash cow for the system.

In-state tuition is $12,804 per year, and about 55 percent of in-state students are low-income and pay no tuition, while out-of-state and international students pay an additional $24,024, for a total of nearly $37,000. The fees collected from out-of-state and international students totaled an estimated $620.7 million in the 2014-15 school year, less than 9 percent of the university’s $6.9 billion core budget, which covers teacher salaries, benefits and financial aid.

“We’d love to add more California students, but we need to get funding from the state to do that,” said Nathan Brostrom, UC’s chief financial officer. “Non-resident enrollment is one revenue source to help with the shortfall.”

The state’s 1960 Master Plan for Higher Education says that California residents shouldn’t pay tuition — only a nominal fee to cover various campus-related expenditures. While the university seldom upheld the lofty goal, it did manage to keep the cost of a bachelor’s degree relatively cheap.

In 1980 the UC received about 87 percent of its core budget from the state’s general fund and 8 percent from its roughly $2,250 per-year resident tuition and fees (in 2015 dollars).

After adjusting for inflation, state funding to the system has declined by more than 30 percent since 1999 — or by about $1.2 billion. Meanwhile, the university enrolled an additional 92,600 students, opened a 10th campus — UC Merced — and has kept resident tuition steady since 2011-12.

“You’ve got a budget constraint, costs are going up, state funding is going down or staying steady, and you’re not allowed to increase tuition,” said Henry Brady, dean of UC Berkeley’s Goldman School of Public Policy. “We’re producing a Cadillac education for the cost of a Chevy, and the state’s saying you should do it at a motorcycle price. At some point you have to ask, ‘What’s realistic?’”

One obvious revenue stream has been supplemental fees from non-resident students.

Cal senior Kelly Kwon, 22, was drawn to the university from thousands of miles away. “The reputation of the school is really good in Korea,” she said. “I thought coming here would help me get a job, and I also wanted to learn English.”

Students like Kwon have been a boost for the university’s finances. No school has welcomed more than UC-Berkeley.

In 2007, 2.6 percent of Cal’s student body wasn’t from the United States. That number climbed to 12.3 percent last year. Student enrollment from other U.S. states nearly doubled during the same time period, from 6 to just under 12 percent.

Meanwhile, the flagship campus recorded the smallest percentage of California residents out of nine UCs last year — about 76 percent. (UCSF, the 10th campus, has been excluded from the analysis because it doesn’t enroll undergraduates.)

Some worry that the uptick is pushing Californians out of their taxpayer-supported universities, which have long been a bastion of affordable and quality education for state residents.

“There’s a lot of positives about having nonresident students,” said Steve Boilard, executive director of Center for California Studies at Cal State Sacramento. “The third-rail issue is: Are these students displacing resident students? That’s where a lot of people get riled up.”

Boilard said the displacement claim doesn’t hold ground systemwide, since UC sets enrollment targets for California students based on funding from the state. But the uptick could be making it harder for in-state residents to get into schools like Berkeley and UCLA — where competition has gotten much steeper.

Some worry that the higher-ranked campuses could follow other lauded public universities — such as the universities of Michigan, Colorado and Wisconsin — where non-residents accounted for 38 to 40 percent of enrollment in fall 2013, the most recent year data is available.

Cal graduate and Korean citizen Jimin Lee, 29, said she largely ignored the controversy while a student, and Berkeley is now a home away from home. “I somehow adapted to the lifestyle here — flip-flops instead of high heels,” she said while applying for jobs at the Free Speech Cafe. “The spirit of Berkeley lives in me.”

Lee said there was an unspoken understanding that the university admitted international students partially for the money they brought — and she understands how resentment from resident students could boil up.

“I’m happy I’m not a policymaker,” she said. “It’s not whether we should move forward or not, but how to create a policy that’s both inclusive and also protective of California natives.”