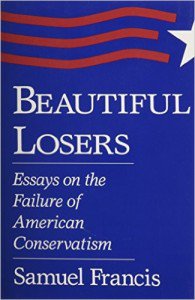 If Trump’s support ends up consisting of people more anti-establishment than Erick, they can hold their meeting in Trump’s limo.

Mirengoff then wanders into what The Donald might say about Powerline. [Trump On Powerline, August 9, 2015]

But Trump has a point. The conservative movement, as Sam Francis wrote, was nothing but a collection of "beautiful losers."

But perhaps this is what Mirengoff calls "winning?"