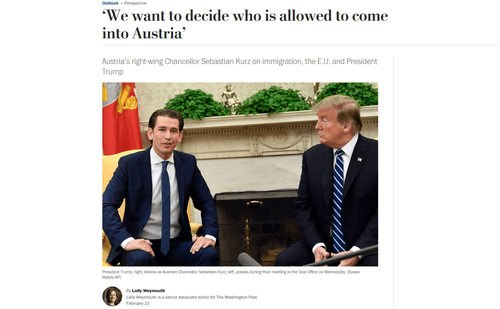 "We Want To Decide Who Is Allowed To Come Into Austria": Austrian Leader Patiently Instructs Journos On Immigration Realities

Sebastian Kurz, the charismatic Chancellor of Austria, recently met with President Donald Trump. The sight of a young nationalist leader meeting with journalists' most hated enemy led to some sneering coverage from American media outlets. One example was the tone of an interview Chancellor Kurz did with The Washington Post. Lally Weymouth simply berated Kurz, who, it should be remembered, leads a country of less than nine million people, to open its borders to the entire world.

A: We have to fight climate change. The answer cannot be to accept climate change and take everybody who wants or has to leave their country of origin. That is not possible. At the moment, there are more than 1 billion people in Africa. At the end of the century, there will be 4 billion people. I don’t think the idea can be that most of them travel to Europe and start their lives here. We have to create better living conditions for people there.

Q: If you start to return refugees, aren’t you going to undermine migrants’ right to seek asylum guaranteed by the E.U.?

This is an outgrowth of what Steve Sailer calls the "world's most important graph." The African population boom is such that simply opening the borders and letting everyone who wants to come to Europe come would barely make a drop in the bucket. Yet to our supposed elites, open borders is the default position. Such a policy would completely destroy Western Civilization, and wouldn't even help Africa. It's a policy motivated by pure spite.

The Post also tried to shame the Chancellor for creating a government with the Freedom Party.

Q: When you became chancellor, many wondered why you went into a coalition with the right-wing Freedom Party, known to be pro-Russian and anti-Semitic.

A: There was no other opportunity. We have a system where you need to build coalitions to have a majority in parliament. The Social Democrats decided not to build a coalition with my party in which they were not in the lead. But we won the elections, so it was our right to lead the government. There was only one opportunity left, and that was the Freedom Party. Secondly, the Freedom Party supported our goals to make the necessary reforms to make the country economically more competitive.

The chancellor's remarks here and elsewhere in the interview were actually very defensive. Still, he didn't throw his coalition partners under the bus. What's more revealing is the Post's immediate attack on a party described as "pro-Russian." The premise that Russia is to be regarded as an existential enemy is deeply ingrained among journalists. It's hard not to see it motivated by ethnic hatred, rather than geopolitical realities.