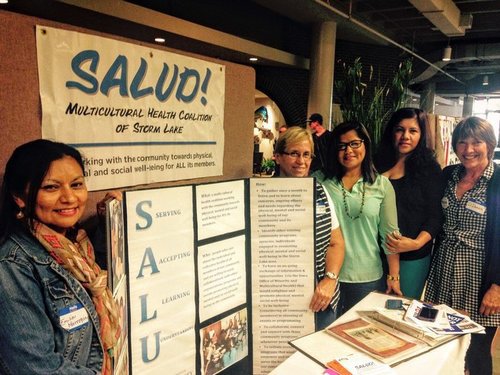 Watch Out, GOP: Iowa (Fueled By Cheap Labor) Is Going Hispanic, Too!

With one sentence in a story about Iowa's demographic shift,  the National Journal has inadvertently explained why the GOP had better stop the immigration:

Though immigration has not been a central issue in local Iowa politics, attitudes about the growing racial diversity recasting this once monolithically white state could add an unpredictable new element to the presidential competition here. How Iowa’s Population Mix Might Scramble its High-Stakes Caucuses, by Ronald Brownstein, August 31, 2015

One might call this a Kinsley Gaffe, but it doesn't quite meet that definition. It's a simple statement of arithmetic reality.

Then it explained the numbers:

Many of those in the room [at a pro-immigrant forum in the meatpacking town of Storm Lake, pictured above] worked for religious, public-health, or social-welfare organizations responding to the demographic transition steadily reshaping the state. Census Bureau figures show that since 2000, non-Hispanic Whites have declined from about 93 percent of Iowa's population to 88 per-cent. Over that time, the absolute number of Whites living in Iowa has actually fallen by about 8,000.

In other words, "many of those in the room worked for" organizations that produce nothing valuable, and agitate either for more immigrants, more welfare or both.

That story contained a link to this one: "46 States Saw Young White Population Decline."

And when the young white population gets too low, who is going to pay the taxes to support the welfare immigrants use?