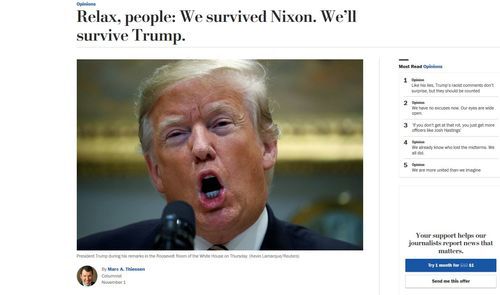 I didn’t bother reading Marc Thiessen’s column in the Washington Post on November 2 because I don’t often read his column. Today I skimmed it so I could write this.

The column doesn’t say much, but note that neocon Thiessen implicitly concedes that Trump is a bad president by comparing him to the avatar of bad presidents, Richard Nixon.

Why not write this column: “Relax, people: We survived Obama. We’ll survive Trump.”

What, pray tell, is there to survive? Tougher border control? A zooming economy? Trump is by no means perfect, but he’s a helluva a lot better than Obama, the anti-American child of a sexually revolutionary mother and African bigamist.

Nixon was a patriot, if a flawed one. Trump is a patriot, if a flawed one. Obama wasn’t a patriot as president and isn’t now. But he was very flawed. As he made clear on multiple occasions in speeches, and repeatedly with legislation and executive orders aimed at wrecking the country, not least by flooding it with Third World immigrants. Recall that The Messiah unilaterally declared the DREAM Act law.

We all know the answer? Such a column wouldn’t be published. And, of course, it wouldn’t be written.

Because columnists like Thiessen know who signs their paychecks. He’s just another of the leftist Deep State’s well-behaved, “conservative” lap dogs.