The one decent element in the 844-page Senate amnesty bill is the proposed termination of the fraud-ridden terrorist-welcoming Diversity Visa. But the Washington Post used its front page on Monday to sniffle about the loss of future diverse residents — oh the tragedy! 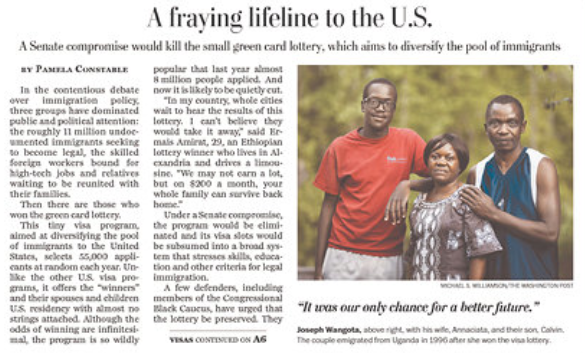 Look at those nice people! Surely America needs more like them. If you disagree — perhaps because of concern that the nation’s environmental sustainability is threatened by overpopulation or perhaps because over 20 million citizens are jobless — then you must be a Bad Person, or worse.

Incidentally, Washington’s mass immigration policy overall is highly damaging to America’s own minority people, who suffer the most job competition from newbies, and have experienced lowered wages as a result.

The Post article is a liberal Rorschach, full of the mythologies that underly the political urge to import foreigners who are supposed to enrich us in some mysterious way. Earnest foreigners arrive, work hard and become successful — it’s a narrative that highlights America’s generosity and openness, although perhaps by too much. Liberals cannot imagine an America without immigration to affirm the upside-down notion that Diversity Is Our Strength. If annoying traditional Americans could be demographically overwhelmed, then the country would be so much nicer — that’s the idea.

But even among the accolades for diverse immigration, the Post had to admit that the Diversity Visa lottery program is riddled with fraud. This widespread fakery means all sorts of criminals and enemies are given entry.

In 2007, the General Accounting Office published a report (Fraud Risks Complicate State’s Ability to Manage Diversity Visa Program) showing that nearly 10,000 people from countries designated as sponsors of terrorism have entered the United States under the Diversity Visa program.

Be sure to read to the end of the Post piece for the guilt-trip finale: foreigners forced to stay in their dirtbag homelands won’t have fulfilling lives if Americans refuse them entrance to the land of opportunity. (Naturally, there is no mention of job displacement of citizens.)

Green card lottery, a ticket to hope for many, could be eliminated, Washington Post, May 12, 2013

In the contentious debate over immigration policy, three groups have dominated public and political attention: the roughly 11 million undocumented immigrants seeking to become legal, the skilled foreign workers bound for high-tech jobs and relatives waiting to be reunited with their families.

Then there are those who won the green card lottery.

This tiny visa program, aimed at diversifying the pool of immigrants to the United States, selects 55,000 applicants at random each year. Unlike the other U.S. visa programs, it offers the “winners” and their spouses and children U.S. residency with almost no strings attached. Although the odds of winning are infinitesimal, the program is so wildly popular that last year almost 8?million people applied. And now it is likely to be quietly cut.

“In my country, whole cities wait to hear the results of this lottery. I can’t believe they would take it away,” said Ermais Amirat, 29, an Ethio­pian lottery winner who lives in Alexandria and drives a limousine. “We may not earn a lot, but on $200 a month, your whole family can survive back home.”

Under a Senate compromise, the program would be eliminated and its visa slots would be subsumed into a broad system that stresses skills, education and other criteria for legal immigration.

A few defenders, including members of the Congressional Black Caucus, have urged that the lottery be preserved. They say it helps compensate for the lopsided history of legal immigration, long dominated by a few large countries with high-skilled workers, such as China and India, and those with strong family ties to the United States, such as Mexico and the Philippines. They also note that it creates wide international goodwill for the United States at a low cost, amounting to only 5 percent of legal immigrants.

“Diversity visas are one of the few ways people from Africa and the Caribbean can come to this country,” Rep. Donald Payne Jr. (D-N.J.) said in an interview. “We are talking about creating a path to citizenship for 11 million undocumented people, and I wholeheartedly support that. But why do we need to cut a program where millions of people are competing for only 55,000 visas? I’m sorry, but I just can’t accept that.”

But senators who negotiated the proposed massive immigration change, which is being aired in a series of hearings, said the diversity program crumbled under Republican insistence on finding more visas for skill-based immigrants. They said it also has lost appeal by shifting from its early goals. Launched in the early 1990s with a focus on Africa, the program has recently brought in large numbers of people from countries including Albania, Nepal, Bangladesh and Iran.

“I was an author of this program. I care about it,” Sen. Charles E. Schumer (D-N.Y.), a key negotiator, said during a recent televised panel. But he said that between Republican opposition and the sense that the lottery had strayed from its original purpose, “we decided we couldn’t continue it.”

Despite its good intentions, the program has also lost luster because of its notorious vulnerability to scam artists. Dozens of unscrupulous businesses offer applicants help through Web sites and e-mails that appear to be from the U.S. government and trick desperate people into sending them money.

Mark Jacobsen, a lawyer in Hawaii who has helped hundreds of lottery applicants in the past 20 years, called the scams a “huge problem” that has gotten worse with reliance on the Internet. “People set up Web sites that mimic the official U.S. government sites,” he said in a telephone interview. “They send out e-mails telling people they have won and that they have to send a $1,000 processing fee right away. In fact, there is no official fee at all.”

The relatively lax requirements for lottery applications have also aroused concerns that it can allow terrorists to slip into the country. To be eligible, someone must be an adult from one of the listed countries, have a high school degree or two years’ work experience, and have no criminal record.

In 2002, an Egyptian terrorist who shot and killed two people in Los Angeles was found to be in the United States through his wife’s diversity visa. Mohamed Atta, another Egyptian and one of the Sept. 11 pilots who died attacking the World Trade Center, had applied twice for the lottery before entering the United States on a different visa to study aviation.

Jacobsen, whose company processed Atta’s unsuccessful lottery application, called the terrorist concern a “red herring” because winners must undergo full background checks and interviews before being granted their visas. “People think if you win, you just get your visa and go,” he said. “It’s a lot more difficult than that.”

State Department officials said the scrutiny of those selected is so rigorous that about half of all finalists are disqualified. This year, for example, the department randomly chose 105,000 “winners” from among 7.9 million applications, but it will issue final visas to only 55,000. In addition, countries are dropped from being eligible if their regular immigration rates surpassed 50,000 during the previous five years­­.

Not everyone who wins a diversity visa prospers in the United States, but many find modest niches in ethnic communities such as the Ethio­pian and Ni­ger­ian enclaves in the Washington area. Those with limited skills or poor English sometimes end up with low-paying jobs, content to send a little money home each month.

Occasionally, the diversity program has produced genuine stars, notably Freddy Adu, a soccer prodigy from Ghana whose mother won the lottery in 1997, when he was 8. The family settled in Rockville, and Adu went on to become one of the youngest players and scorers in Major League Soccer. After several years with D.C. United, he plays for a team in Brazil.

Most winners, though, are just ordinary people from poor or troubled countries who keenly appreciate their luck.

Among them are Joseph and Annaciata Wangota, who emigrated from Uganda in 1996 after she won the lottery. Settling in Chantilly, the couple worked hard, saved money and made their kids study instead of playing video games. Today, he has a high-tech job at the Justice Department, their son is a high school honor student and their daughter is about to graduate from Duke.

“We have achieved more than we ever dreamed,” Joseph Wangota, 51, said at home last week. “Our top priority is our kids, and we knew we would never be able to give them a good life in Uganda.” When they suddenly got the visa, he added, “we knew we would miss our friends and family, but it was our only chance for a better future.”

Bete Mariam, 39, a District resident who won the lottery in 2002, is among hundreds in the region’s large Ethio­pian community who have settled here through the visa program.

“Back home, a lot of my friends have no work and some are in jail,” Mariam said. After working ­­nights at a gas station while earning a degree, he is now a hospital X-ray technician. ­­”I could be one of those jobless guys, but here I am supporting my family,” he said. “For everyone who wins, many benefit.”