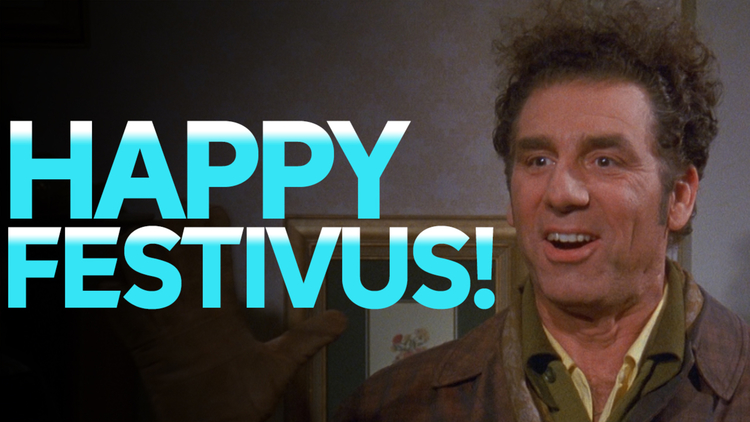 War On Christmas Extends To Festivus

If you don't know what Festivus is, it's an anti-Christmas celebration inspired by a Seinfeld episode in 1997. Known as a "Festivus For The Rest Of Us," it's a celebration for people with a very bad attitude towards Christmas, and just a general bad attitude. It features, instead of a Christmas tree, a bare aluminum pole, which in a striking commercialization of a explicitly anti-commercial holiday, is marketed by a Milwaukee, Wisconsin company.

Ann Althouse reports that, since the flap about Michael Richards' intemperate remarks, the Governor of Wisconsin, who actually erected a Festivus pole in the Governor's Mansion last year, (remember, it's a Milwaukee company that makes these things, and Governor Doyle is a Seinfeld fan) is having doubts about doing it again this year:

After Kramer flap, gov not in a Festivus mood, The Capital Times, By Scott Bauer Associated Press

In fact, Doyle said he won't be recognizing the made-up holiday after Michael Richards, aka Kramer, unleashed a string of racial slurs at black patrons during a recent comedy club appearance.

"Probably like a lot of people, I'm still sorting out my feelings about it all," Doyle said Friday. "It's pretty hard for me to watch the show right now."

Frankly, I'm not going to cry for Festivus, anymore than I was worried about the guy in Fort Worth who thought that the bus-and-truck version of the Radio City Christmas Spectacular wasn't secular enough. (He wrote that "wrong to assume that Jews, Muslims and other non-Christians don't have the same right to holiday fluff that Christians do," and suggested anti-Christian readers should "remember to leave" before the Baby Jesus came on.)

But this is because Michael Richards, (who played Kramer on the show) cursed at some hecklers using bad language, specifically including a Deplorable Word

which I will not repeat, that this mindless enthusiasm has turned into mindless rejection. Russell Wardlow, surveying the wreckage of Richards' career, among other reactions, has done a post on racism vs. anti-racism which touches on a more important issue than Festivus, here's an excerpt, but read the whole thing.

I've come to the conclusion that the negative effects of our society's obsession about being anti-racist some time ago crossed the line and started to vastly outweigh the negative effects of racism itself. The first point is that the word has lost any claim to a reasonable definition. I still think that there is something to which one could attach a useful definition of "racism" which would retain its pejorative aspect; something along the lines of substantial invidious animosity against a racial group. But to whatever extent it i exists, I don't think it's worth getting worked up about, at least in any way that gives it place of privilege over other human faults.[Emphasis added]Mean Mr. Mustard 2.0: Michael Richards, Racism and Thoughtcrime