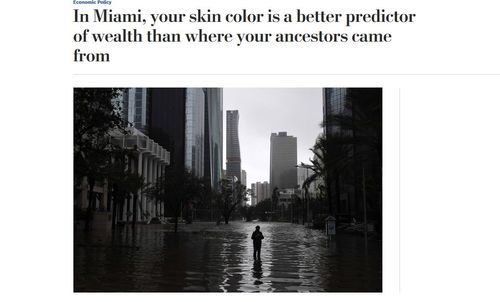 WaPo: "In Miami, Your Skin Color Is a Better Predictor of Wealth Than Where Your Ancestors Came from"

In Miami, your skin color is a better predictor of wealth than where your ancestors came from

Race appears to trump ethnicity when it come to predicting wealth, according to a new report examining the economic disparities among Miami’s diverse population.

The report, released this week by Ohio State University, Duke University and the Insight Center for Community Economic Development, compared the economic positions of nonimmigrant black people in the United States and those with ties to Puerto Rico, Cuba and other parts of the Caribbean and Latin America with white people and Latinos who identified as white or other on census forms.

Among the most provocative findings: Identifying as black or white was a bigger factor than ancestry or ethnicity in determining employment, income and homeownership, said Darrick Hamilton, an economist who co-authored the report and leads the Kirwan Institute for the Study of Race and Ethnicity at Ohio State.

Descendants of black Americans, Afro-Caribbeans — primarily Haitians, Jamaicans, Trinidadians and Tobagonians — and black Latinos were more economically similar than Latinos of various ancestry who identified as white, the researchers found.

Latinos who identified as white generally have higher household incomes and homeownership rates and lower unemployment rates than those of black Latinos, the study found.

The researchers combined their own survey data in Greater Miami with data from the U.S. Census Bureau between 2013 and 2015 to conduct their analysis.

The median household income for black Cubans was $22,900, compared with $38,000 for white Cubans. But that racial wealth gap narrows significantly for Colombians, Puerto Ricans and Dominicans. Hamilton said that could be because some Latinos of color may more readily identify as white.

In the future, this kind of study can add DNA data on ancestry to self-identification.

“It’s controversial, but important,” Hamilton said. “It dispels some of these myths about cultural efficacy and addresses the need to deal with social structures that still put a high reward on whiteness at the expense of blackness.”

In other words, blacks tend to be popular hires for public-facing jobs in tourism and travel. (E.g., as you can see at your local airport, blacks have been disproportionately hired for travel jobs since the Pullman porters of the late 19th Century.) In contrast, nobody much cares about actuaries’ races, looks, or personalities, but blacks don’t get hired as actuaries very much.

and land expropriation through eminent domain, researchers wrote. In the 1960s, the government built an interstate through the economic heart of the black community in the Overtown neighborhood, seizing black properties and displacing tens of thousands of black Americans, Bahamians and other black residents.

The real issue about why Miami is so bad for African-Americans is that once Latinos started to take over about a half century ago, they didn’t care much about affirmative action for blacks. So Miami blacks with something on the ball have tended to move to Atlanta, where the white American corporate sector was willing to play ball with African-Americans, while white Cubans in Miami don’t give a damn about African-Americans. So, African-Americans left in Miami tend to be the least enterprising.