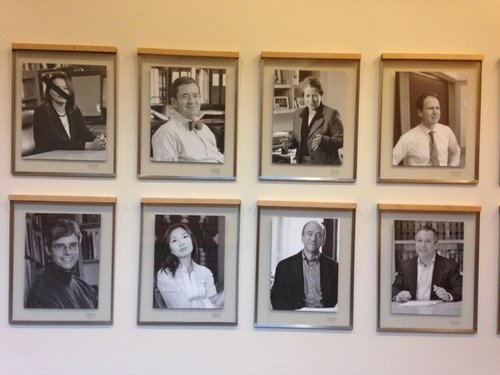 “Expressions of hatred are abhorrent, whether they be directed at race, sex, sexual preference, gender identity, religion or any other targets of bigotry,” Minow said.

Student activists have called the incident “hateful retaliation” against black student activism, and it comes at a time when conversations about institutional racism on campuses have been thrust into the national spotlight. Earlier this month, the University of Missouri’s president resigned amid growing complaints, protests and boycotts over his handling of campus racism and bigotry.

… Harvard students circulated photos of the defaced portraits soon after the discovery, and while she was upset upon seeing the images, second-year student Michele Hall told The Washington Post: “I also wasn’t surprised. This is part and parcel of what is happening here at Harvard and also at other institutions across the country.”

Hall, who wrote about the law school incident on Blavity, called the defacing of the portraits “an act of bias and an act of hate meaning to show that we don’t belong, that black professors don’t belong here,” she said. “It’s part of a larger narrative of black students and students of color not belonging here and being excluded here.”

Dean Martha Minow said in an e-mail to the law school student body that she was “saddened and angered by this act,” the Boston Globe reported. A community campus meeting, already scheduled for Thursday, ended up centered on the incident and racism, Hall said.

Minow attended the meeting, where she acknowledged that racism is a “serious problem” at the law school and that “racism exists in America and in the United States and in Harvard and in Harvard Law School,” reported the Harvard Crimson, a campus newspaper.

“Here at [Harvard Law School], we are focused on efforts to improve our community, examining structures that may contribute to negative experiences of any members of our community, and pursuing opportunities where the School can both change and support change,” Minow said in a statement.

I don’t know the facts about what really happened in this specific case, but …

A. There is a looooong history of “hate hoaxes” on campuses.

B. The financial markets are pretty high right now (Yale’s endowment, for instance, is $25.6 billion, up 11.5% in one year). So that attracts shakedown artists looking to intimidate wealthy universities into further subsidizing their rackets as the price of temporary peace. Thus, the Halloween Costume Crisis at Yale led to Yale’s president announcing a bunch of new jobs that otherwise unemployable #BlackLivesMatters activists like that cursing coed can timeserve in. From Education Dive:

In the wave of student unrest following successful demands for high-profile resignations at Mizzou, Yale is expanding its diversity initiatives and students at Occidental College are calling for their own presidential ouster.

While affirming the right to free speech, Yale President Peter Salovey announced a new center for scholarship around race, ethnicity, and other aspects of social identity, twice the funding for Yale’s four campus cultural centers, additional financial aid for low-income students, training for mental health professionals and the entire administration, and a five-year conference series on race, gender, inequality, and inclusion — among other initiatives.

C. If this is a hoax, it’s not a “hate crime hoax,” it’s a genuine “hate crime” in which malefactors used fraudulent means to gin up racial hate against whites. [Comment at Unz.com.]