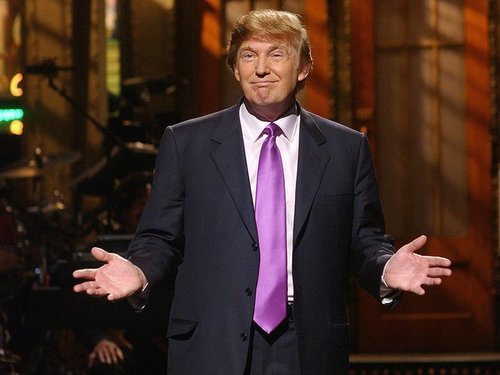 Episode 12 of my podcast with Kevin Steel is now posted here. In Part 1, we discuss Donald Trump’s hosting of Saturday Night Live and conclude (like everyone else) that it wasn’t very funny, save for Larry David’s irruption.

But SNL is never very funny; and The Donald was not there to bring the funny. He was there to (in the words of Dilbert’s Scott Adams) get Americans to “think past the sale.” In that he succeeded admirably, proving yet again that the MSM Can’t Stump The Trump and precipitating an orgy of anguished recrimination from the bien pensants at Salon, Slate and the AV Club. We also discuss the curious case of Antipodean chanteuse Sia, whose career suggests that today’s pop stars are now tipped for the top based not on talent or the ability to connect with their audiences but rather for their obvious insanity.

In Part 2, we consider the merits of the James Bond and Star Wars franchises, question whether Sonny Bunch is a real name and salute the “consummately rambunctious” Kelly Jane Torrance on the occasion of her 38th birthday.

In Week 10 of our feature A Year of Cinema: My 52 Favourite Films, I sing the praises of Martin Scorsese’s nightmare comedy After Hours, wherein Griffin Dunne suffers the tortures of the damned for his desire to violate the Sixth Commandment with the delicious Rosanna Arquette.